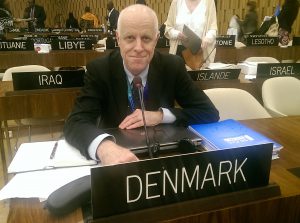 1993-1997: Chair of the chapel of journalists at Danish Broadcasting Cooperation

1980-1984: Student at and graduated from the Danish School of Journalism in Århus

2013-2016: EFJ: President of the European Federation of Journalists

2007-2010: IFJ: Member of the Executive Committee of the International Federation of Journalists

2014-2018: IPDC: Member of the Council and Bureau of the International Programmeof the Development of Communication at UNESCO

2003-2011: INSI: Member of the board of The International News Institute

2001-2016: IMS: Cofounder, board member and vice president of the International Media Support

2015-: ECPMF: Board member of the European Center for Press and Media Freedom

Europe plays a key role ensuring best working conditions for journalists, authors’ rights, safety, press freedom including a pluralistic media landscape and self-regulation. Because of that, we as European unions have a duty to use all efforts to provide the best environment for journalists and journalism.

In the coming three years, we should follow-up on EU topics as the TTIP and digital single market ensuring remuneration for authors’ rights. On top the agenda will also be working conditions for atypical workers as freelancers including fair contracts. We will continue the good work done by our team in Brussels during the past three years influencing on all legislation concerning working conditions and media policy.

Our cooperation with the Council of Europe concerning the alert platform reporting violence on journalists and journalism that we in December 2014 launched together will continue and should be enhanced. Unfortunately, safety has become a more important issue in Europe. The big jails for journalists in Turkey and Azerbaijan, violations and journalists been beaten up or killed. We are facing a new reality that we have to meet firmly. We should find new resources as funding to provide assistance for our affiliates.

As the media landscape is rapidly changing, we as a European federation should have a leading position not only in defending our rights but also to take part in the development as the best way to predict the future is to create it yourself. We should benefit from our project “Rights and Jobs” having more focus on how our affiliates successfully can influence the market for journalists creating more jobs.

The online platform is not a threat but a huge possibility for developing press freedom and free speech, and that is why we should be on top of it. Pluralism consisting of strong and sustainable private media together with public broadcast and a growing landscape of all sort of new media is our way as an open-minded organization to develop free media as a prerequisite for democracy.

During three years as president, one of my tasks has been to build bridges between the European affiliates and all their differences. To be able to make a difference, we must respect each other with our different conditions, backgrounds and ways of dealing with development of media and journalism. Regardless of that, we share our core values and have common interests. We need strong unions, and because of that, we must urge all of us in Europe, the EFJ as well as its affiliates seriously to work on capacity building of our organizations.