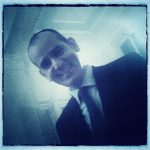 Born in Thessaloniki, Greece, in 1969, I ‘ve studied Greek Literature. Having worked as a journalist, since 1989, in both newspapers and radio, I have also edited numerous books and collaborated with various magazines, either as a contributing editor or as an editor-at-large, or as both. Since 2003 I am the director general of the Journalists’ Union of Macedonia and Thrace Daily Newspapers.

An allegiance to the ideal of European cooperation and a belief that the practice of journalism requires openness and equality are two principles that characterize the Greek Union of Journalists which I have been working for since 2003. A relatively small union (in terms of European sizes), a regional one, located far from the country’s capital, ESIEMTH  supported for a number of  years my involvement in numerous EFJ groups and committees, such as the Authors’ Right Expert Group (2004-2007), Labor Rights Expert Group (2007-2016), Steering Committee 2013-2016.  The European Federation of Journalists, that is its affilitliates, entrusted upon a representative of a small regional union a role of responsibility within its administration ranks.  This mutual entrustment exemplifies how strongly and how effectively the Federation upholds the principle of parity and represents a very clear hierarchy of its aims: to promote journalism as a means to establish democracy free of any discrimination and to renew the European ideal guided by the principle of equality and solidarity.

The Bergamo meeting in 2012 marked a new era for the EFJ: Its identity was strengthened, its position in the dialogues with the European institutions was upgraded, while its responsiveness to the member-unions was vastly improved, along with its mutual communication and involvement.

None of these on their own would matter so much if they didn’t meet the pressing and imperative needs of journalists today: As the working environment has changed so dramatically, all of us who share the mandate of supporting journalists should try to discover flexible, effective and realistic ways to adapt to these changes.  From our smallest member-union up to the ranks of the EFJ itself, we all have to address these changes as a challenge. This means we ought to make these developments work to our advantage, for the sake of journalism and for the sake of journalists.   I believe the outgoing Steering Committee, and I as well as a member thereof, duly served this very purpose and I hope to be given again the opportunity to contribute to the EFJ’s efforts to achieve this objective.