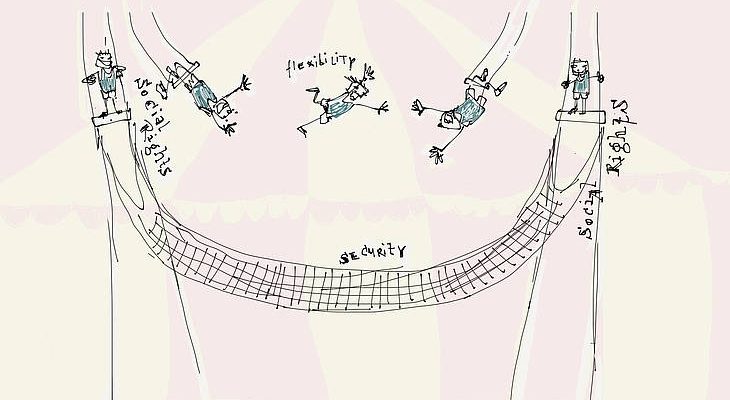 
On 26-27 January, FIA (Actors’ Unions), FIM (musicians), UNI-Europa (media, entertainment & art) and the EFJ organised a workshop in Ljubljana and discussed how to better protect those categories of workers who do not enjoy any social and legal  protection.

MEP Tanja Fajon gave a video key note speech reminding participants that all EU Member States are committed to provide social security for all workers, and that we all have to defend the European social model.

She referred to the EP report on social protection for all including self-employed workers. The report asks the European Commission and Member States to reach equal treatment among all workers independent of their employment contract , including :

In Slovenia, over 70% of young people have precarious employment status. There are about 600 self-employed journalists. The Slovenian government has recognised that in public broadcasting sector a lot of bogus self-employment is in fact illegal, and therefore the Slovenian TV has employed a number of workers, but only those who have the appropriate university degree. This development will also be outlined by the upcoming workshop by the EFJ on “Collective bargaining for all also in Ljubljana on 17-18 March.

The representative from the Chief Labour Inspector in Slovenia said: “Our mission is to protect all workers. the legislation is too detailed, and there are many violations, on the top non-payment and second no respect for working hours. Trade unions are a crucial link in providing security.”

Dr. Eva Fehringer, Deputy Head European social policy and labour law, Austrian Ministry for Social affairs, outlined the challenges for protecting self-employed and dependent or bogus self-employed workers at national and at European level.  There is no clear-cut definition of dependent self-employed and self-employed. She acknowleged that collective bargaining for these workers is undermined. She mentioned a new initiative, watchlist-prekaer.at , an anonymous complaints website. She also mentioned the EU Platform on undeclared work. She concluded that unions should be able to do collective claims (class actions) on behalf of freelances.

Our affiliates from Austria, the GPA-djp and its colleagues from work@flex, their interest group for freelancers from all branches, have launched two websites, where trainees and freelancers can accuse companiesof unfair treatment. The union then quotes from the stories, the people tell on the website provoking companies to react (often via press releases). Additionally, the union informs the medical insurance company about employers who work with “fake-freelancers”, which can result in paying high penalty fees and/or the need to employ them.

The last session covered the important issue of “social dialogue as a tool to protect atypical workers. A bad example from Romania showed the complete disrespect for International standards on social rights including the right for collective bargaining and the right to strike, introduced by recent amendments in the labour law.

Michael Hirschler from the DJV outlined collective agreements for dependent freelances (12 a contract), who work over 50% for one employer,  in the public service broadcasting, which had been introduced in the 70s. Though this gives security when it comes to authors’ rights, maternity leave, sick pay, holiday, termination payment etc, but in his view it is a powerless tool for unions.

Renate Schroeder addressed the erosion of the social model taking place all over Europe and that the political will to defend a Social Europe had to be enforced. With regard to the digital revolution, unions must be extremely prudent and vigilant to keep collective bargaining for all workers a priority which cannot be circumvented.

The seminar  is part of a two year project on “reaching out to atypical workers in the live performance and audiovisual sectors.” and has the support of the European Commission. The next meeting will take place in Rome on 7-8 April.