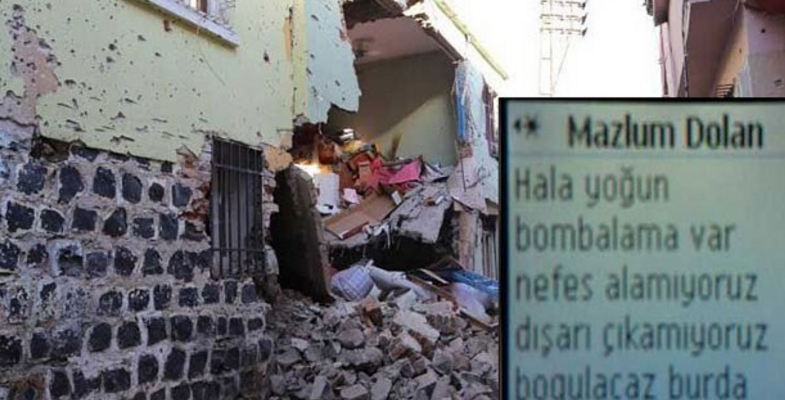 
The European and International Federations of Journalists (EFJ-IFJ) are strongly concerned about the alerts they receive on a daily basis about DIHA journalists and media workers being permanently attacked, beaten, threatened or jailed by the Turkish authorities because of their news coverage in conflictual Kurdish populated areas in Southeastern Turkey.

The most recent violation is related to Mazlum Dolan, DIHA press correspondent in the municipality of Sur (Diyarbakir), where the journalist was locked at the basement of a building under heavy firing. “We are under heavy bombing, we can’t breath and we can’t go out. We are going to suffocate here”, says the journalist by SMS in desperate call for help.

The Freedom for Journalists Platform (GÖP) in Turkey, including EFJ-IFJ affiliates TGS and CGD, has immediately called for the safe release of Mazlum Dogan. “The life of our colleague is at stake. The life of our colleague – who was working for the public’s right to access information – like any other citizen’s life is under the responsibility of the governor of Diyarbakir. We, 94 professional organisations united in the Freedom for Journalists Platform, are asking the governor of Diyarbakir to guarantee the safety rescue of our colleague Mazlum Dolan”, said Ahmet Akbay, CGD President and GÖP spokesperson.

The EFJ-IFJ learned that Maslum Dolan has been taken out of the building and is now taken into custody for police interrogation. His cases will be closely followed by GÖP and reported to the international organisations.

Since January 2016 and only for DIHA-related cases, the EFJ-IFJ has already reported 5 serious cases of media freedom violations to the Council of Europe’s platform for the protection and safety of journalists and to the Mapping Media Freedom project.