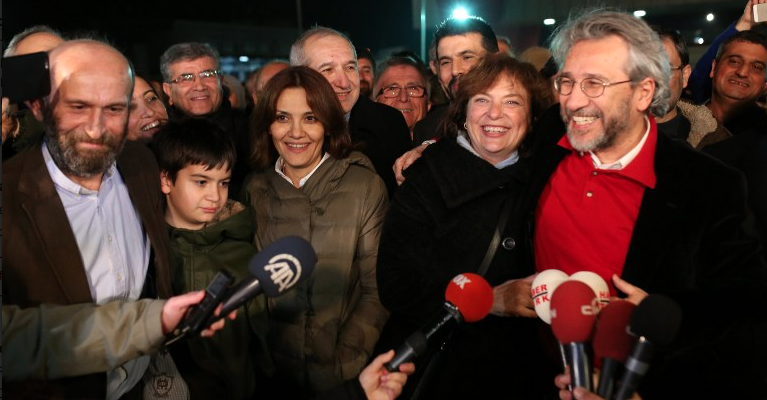 
The European and International Federations of Journalists (EFJ-IFJ) warmly welcomed today Turkey’s Constitutional Court ruling on February 25 stating that the rights of Cumhuriyet newspaper journalists Can Dündar and Erdem Gül have been violated and underlining the lack of justification to jail them following the publication of several articles. The ruling refers to the violations of Article 19 (“right to personal liberty and security”), Article 26 (freedom of expression) and Article 28 (press freedom) of Turkey’s Constitution.

Dündar and Gül were arrested on 26 November 2015 after the newspaper’s reporting and footage of the content of trucks belonging to the National Intelligence Agency. They each face aggravated life sentence, an additional life sentence, as well as 30 years in prison for revealing state secrets in a May 2015 report.

“The release marks an important day for media freedom in Turkey,” Mijatović said. “But the charges against Dündar and Gül must be dropped and Turkey must embark upon the reform of the laws that can currently criminalize journalistic work,” the OSCE Representative on Freedom of the Media, Dunja Mijatović said, adding that more than 30 journalists are still in prison in the country.

Both,arrested journalists have been released the same day around 03:00 am from Istanbul’s Silivri detention center but the prosecution continues against the journalists.

A strong local and international support from colleague journalists, trade unionists and press freedom organisations has been very active and effective for this case since the beginning of their arrests on November 26, 2015.

Welcoming the release of Can Dündar and Erdem Gül, the EFJ-IFJ is now calling the authorities to drop all the charges against them and to release the remaining 30 other journalists still in jail.

“We are happy that our colleagues Can and Erdem have been released. The struggle continues until the release of the last journalist in jail”, said TGS (Journalists Union of Turkey).

Victory for trade unions in Turkey
Two weeks ago ETUC General Secretary Luca Visentini and ITUC Deputy General Secretary Jaap Wienen joined a delegation with Turkish affiliate DISK to the prison where the journalists were held, and called for their immediate release.
“This is a victory for justice and freedom of the press” said Luca Visentini “and a victory for the Turkish trade unions who worked so hard to publicise their case. Trade unions have a vital role to play in the development of Turkey into a strong democracy and an economic powerhouse. It is to Turkey’s credit that the Constitutional Court took this decision and I hope the Turkish authorities welcome and respect it.”

“With dozens more journalists still in prison in Turkey, this decision from the Constitutional Court in support of press freedom should pave the way for the release of the other journalists too,” said Wienen.