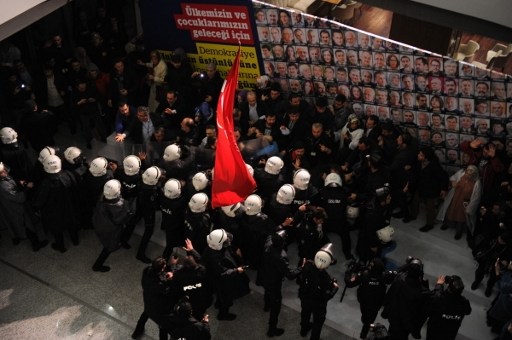 
Update (05/03/2016): Turkish police have raided the offices of Zaman, the country’s biggest newspaper, late on Friday, in Istanbul, hours after a court ruling placed it under state control.

Another blow to free speech in #Turkey: #Zaman takeover is nothing but a veiled move to eradicate opposition media pic.twitter.com/fJM0QZ4EJc

The European Federation of Journalists (EFJ) and the International Federation of Journalists (IFJ) are closely following and with great concerns the ongoing media crackdown against Zaman media group in Turkey. On March 4, according to local media reports, an İstanbul court has appointed trustees to take over management of Zaman-Today’s Zaman newspapers and Cihan news agency, putting at risk press freedom, media pluralism in the country and job security for over 1.000 journalists and media workers employed by the media group.

“The European Union cannot remain silent to the political seizure of Zaman newspaper, Today’s Zaman daily and Cihan news agency. The appointment of trustees by the judicial system was actually foreseen to save dying private companies and cannot be used to silence critical media outlets or to attack social rights of media workers”, said the president of the EFJ, Mogens Blicher Bjerregård.

The EFJ/IFJ will report this case to the Council of Europe’s platform for the protection and safety of journalists and to the Mapping Media Freedom platform as a new example of media freedom violation in Turkey.  The Deutsche Journalisten-Verband (DJV, EFJ’s affiliate in Germany) has also strongly criticized the never ending “climate of harassment, intimidation and persecution of critical journalists in Turkey”.

The appointment of trutees may also have international implications for media workers since the Zaman media group also publishes affiliated newspapers in more than 35 countries.

“Turkey’s highest circulating newspaper, Zaman, and its sister publication Today’s Zaman have come under serious pressure for more than two years, which has taken the form of accreditation bans, tax inspections, meddling with its advertisers and threats to its readers. We have now been threatened with confiscation through the appointment of trustees. We are deeply concerned about all these developments that undermine Turkey’s democratic performance. We believe the only way out of this nightmarish atmosphere is to return to democracy and the rule of law. We are publishing our concerns to inform the Turkish nation, intellectuals who believe in democracy and the wider world”, writes Today’s Zaman in of its last editorial published today.

“I deplore the information reported by Turkish media and the Anadolu Agency that an Istanbul court took the decision to entrust to court-appointed trustees the control of the media group to which the newspapers Zaman and Today’s Zaman belong. Considering what happened after a similar appointment of trustees to the Koza Ipek media group, I see this as an extremely serious interference with media freedom which should have no place in a democratic society. It is the latest in a string of unacceptable and undue restrictions of media freedom in Turkey, and it reinforces an extremely worrying pattern of judicial harassment against dissenting media and journalists in the country. I urge the Turkish authorities to take all necessary measures to reverse the effects of these interferences and to prevent them in the future. I intend to include media freedom among the main issues I will discuss with the Turkish authorities during my forthcoming visit to Turkey in April”, said Nils Muižnieks, the Council of Europe Commissioner for Human Rights.

OSCE Representative, Dunja Mijatović called on Turkey to refrain from acts of intimidation against media, following appointment of trustees to run Zaman newspaper. “Today’s decision of the authorities to appoint trustees to Zaman newspaper is deeply worrying. This move not only further threatens media pluralism in the country, but also intimidates critical voices”.