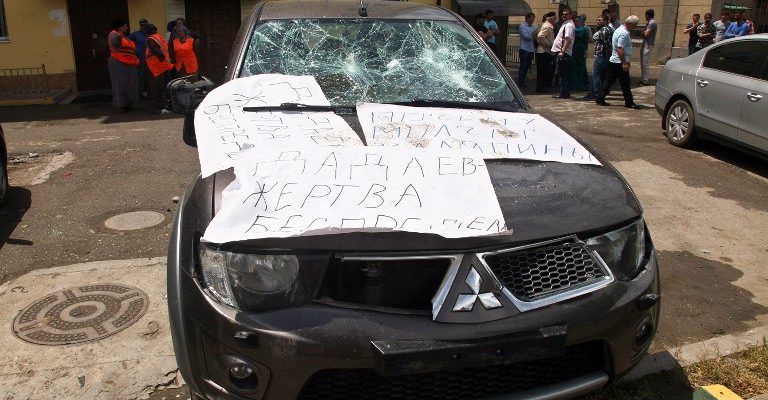 
A violent attack by unknown assailants against a group of eight journalists and human rights activists occurred on 9 March at the border between Chechnya and Ingushetia, in Russia.

The International and European Federations of journalists (IFJ/EFJ) joined their affiliate, the Russian Union of Journalists (RUJ), in condemning the beating of journalists and human rights defenders and called on the Russian authorities to investigate the case and to bring the perpetrators to justice.

About 50 kilometers from Grozny, on the main road to Baku, a press tour organised by the Russian Committee on Prevention of Torture was forced to stop by a group of armed and masked men. The group shouted: “You defend terrorists, murderers of our fathers!”, media reported.

The eight passengers and the driver were forced from their vehicle and beaten up. Their minibus was set on fire.

At least four people were hospitalised.

The RUJ has sent a request to the General prosecutor’s office, demanding an urgent investigation. “We must do our best to investigate this ugly and violent attack against our colleagues. The authors must be brought to the court,” said RUJ president Vsevolod Bogdanov.

“Those who attacked our colleagues yesterday should be held accountable for their acts,” said IFJ President Jim Boumelha. “We call on the Russian government to take every necessary step to ensure journalists can report freely on the ground”.

“We cannot accept these violent attacks against journalists and human rights defenders. I call on Russian authorities to provide efficient protection to journalists reporting in Chechnya and Ingushetia,” said the EFJ President, Mogens Blicher Bjerregård.

“Further to the very serious attacks against journalists and human rights defenders which occurred in Ingushetia yesterday, I have reiterated my concerns to the Russian authorities in a telephone conversation this morning,” said Nils Muižnieks, the Council of Europe Commissioner for Human Rights. “I took note that the Ministry of Interior of Ingushetia has opened an investigation in this case. This is a first step, but more has to be done. I urge both the Russian federal authorities and those in Ingushetia to heed the recommendations made by international organisations and by the Russian Human Rights Council which request resolute action in order to shed full light on these heinous attacks and quickly bring those responsible to justice. This represents a crucial step for Russia to demonstrate its commitment to ensure a safe environment for human rights defenders and journalists.”

(Picture: the office of the Committee Against Torture in Grozny was already attacked on June 3, 2015 by a group of young men) (Credit: Str / AFP)