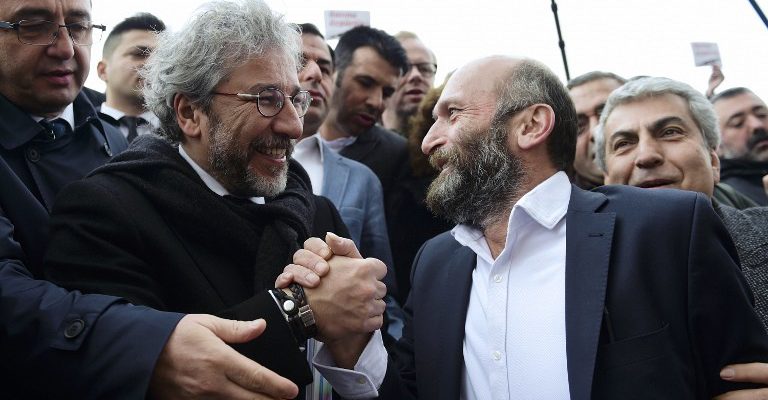 On the eve of a trial scheduled to start on March 25, 2016, a coalition of leading international free expression and press freedom groups, including the European Federation of Journalists (EFJ), condemns the criminal case targeting Cumhuriyet journalists Can Dündar and Erdem Gül, and calls on authorities in Turkey to drop all charges against them.

Dündar, editor-in-chief of Cumhuriyet, and Gül, the newspaper’s Ankara representative, face accusations of aiding a terrorist organisation, espionage and disclosure of classified documents for reports in Cumhuriyet claiming that Turkey’s intelligence agency secretly armed Islamist rebel groups in Syria. Although those claims previously had been reported widely by other media outlets in Turkey, a criminal case against Dündar and Gül was initiated after Cumhuriyet published a report on May 29, 2015 that included a video purportedly showing Turkish security forces searching trucks owned by the country’s intelligence agency that were travelling to Syria containing crates of ammunition and weapons.

Dündar and Gül were detained in November 2015 and held for nearly 100 days in Turkey’s Silivri Prison until the country’s Constitutional Court ruled that the journalists’ pre-trial detention violated their human rights. Both journalists were subsequently released pending trial following a criminal court order. Nevertheless, Turkish President Recep Tayyip Erdoğan vowed that he would neither recognise nor obey the Constitutional Court’s ruling. Moreover, prominent supporters of the ruling Justice and Development Party (AKP) demanded that Dündar and Gül be returned to prison and they called for Turkey’s citizens’ right to turn to the Constitutional Court to redress violations of their human rights to be curtailed.

The persecution of these two journalists – a gross abuse of government authority in clear violation of the right to press freedom – is by no means an isolated case. More than 30 journalists currently languish behind bars in Turkey, of whom at least 13 are being held in direct retaliation for their work. Recent months have seen the state seizure of opposition media outlets – including the March 2016 takeover of the Zaman newspaper and Cihan News Agency. Recent months have also seen numerous violations of the right to press freedom in Turkey, including, among many others, the continued misuse of defamation and insult law, as well as anti-terrorism law, to target and silence those who publicly express their dissent from government policies.

Members of the coalition accordingly urge Turkish authorities to drop all charges against Dündar and Gül, and to free all other journalists currently detained in connection with their journalism or the opinions they have expressed. The coalition further renews its previous call on lawmakers in Turkey to take steps to reverse the country’s trend toward authoritarianism, and its call on governments of democratic countries to pressure the Turkish government to end its crackdown on independent media and to meet its human rights commitments under both domestic and international law.