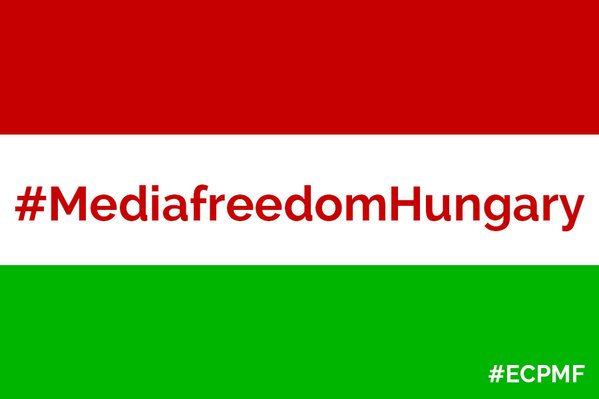 
Hungary’s Prime Minister Viktor Orban is under fire, with protest letters from the European Centre for Press&Media Freedom (ECPMF) being delivered to his embassies and consulates across Europe on 14 April.

The European Federation of Journalists (EFJ) has joined today the ECPMF in its action for media freedom in Hungary. “We appreciate the ECPMF action towards the Hungarian Prime Minister who consistently since 2010 has attacked media freedom in Hungary. Growing government pressure has led to growing self-censorship among journalists. A rule of law procedures like in Poland should have been likewise introduced in Hungary, if the EU wants to be trusted when it comes to be the guardian of fundamental rights”, says EFJ Director Renate Schroeder.

The ECPMF is currently protesting in twelve capitals and spreading a letter adressed to Viktor Orban that will be dropped off in the mailbox of many Hungarian embassies in Europe.

In this letter, ECPMF urges Hungarian Prime Minister Viktor Orban to respect press freedom and to prove with actions that the government defends this fundamental right and the rights of press workers. It also calls to investigate recent press freedom violations related to the refugee crisis. The letter cites the incident at Röszke-Horgos on the Serbian-Hungarian border in September 2015, when Hungarian police attacked and imprisoned journalists from Serbia, Slovakia and Australia, who were covering an attempt by hundreds of refugees to get through the border fence: “We are asking you to initiate a thorough investigation of the assault and to bring to justice those responsible for the violation of press freedom and for violating the personal integrity of the media workers who were assaulted”, it says.

To support ECPMF, tweet about the action with the hashtag #MediafreedomHungary and publish the letter in your networks. EFJ affiliates from Serbia and Romania have participated in this campaign.