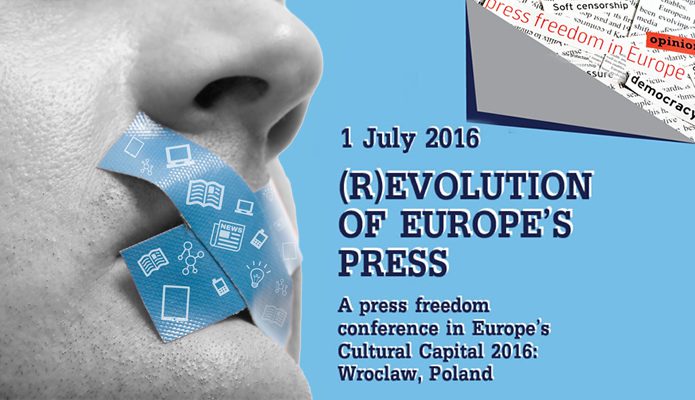 
On May 3, World Press Freedom Day, offers an opportunity to highlight the importance of defending press freedom worldwide, as it is an essential component of any democracy. The European Magazine Media Association, in cooperation with an alliance of national, European and international media and journalist organisations, is organizing a conference, “(R)EVOLUTION OF EUROPE’S PRESS”, on 1 July 2016 in this year’s European Capital of Culture, Wroclaw, Poland. The event will bring together press publishers, politicians, journalists, academics, start-ups and technology experts to discuss a holistic view of real and potential threats for press freedom in Europe.

World Press Freedom Day was proclaimed by the UN General Assembly in December 1993 as an opportunity to celebrate the fundamental principles of press freedom, assess the state of press freedom worldwide, to defend the media from threats to their independence and to acknowledge and pay tribute to journalists who have lost their lives as a result of their work. This year, the focus is on three different aspects of press freedom:

As indicated in the recent editor of the World Press Freedom Index, published last month by Reporters Without Borders, there has been a distressing decline in press freedom globally. Therefore, it is as important as ever to continue to raise awareness about the threats against freedom of expression and information.

“According to all our indicators, press freedom has deteriorated in all parts of the world,” said Christophe Deloire, Secretary General of Reporters Without Borders. “Many of the world’s leaders are developing a form of paranoia about legitimate journalism. This climate of fear results in a growing aversion to debate and pluralism, a clampdown on the media by ever more authoritarian and oppressive governments, and reporting in the privately-owned media that is increasingly shaped by personal interests. Guaranteeing the public’s right to independent and reliable news and information is essential if humankind’s problems, both local and global, are to be solved.”

Mogens Blicher Bjerregård, President of the European Federation of Journalists said: “Press freedom is a fundamental right in Europe and the attempt of governments to influence media is an inevitable threat to democracy. Journalists play a crucial role in this democratic process and it’s vital that neither national nor European law hinder their professional right to practice their profession.”

To reinforce and further explore the importance of press freedom for democracy, a unique coalition of national, European and international journalist and press organisations* is organizing a one-day conference in this year’s European Cultural Capital Wroclaw, Poland. The event, “(R)EVOLUTION OF EUROPE’S PRESS” is scheduled to take place on 1 July 2016, and aims to bring together press publishers, politicians, journalists, academics, start-ups and technology experts from across Europe to discuss how changing political priorities and technological innovation and disruption impact press freedom. The conference will open with an exclusive gala reception and dinner on 30 June 2016, which will be hosted by Rafal Dutkiewicz, the mayor of Wroclaw.

“We’re very happy to be co-organising this event with our European and international colleagues,” said Dr. Wieslaw Podkanski, President of the Polish Chamber of Press Publishers. “This is a time of fast-paced changes in the media sector, and it’s important to come together as Europeans to discuss and contextualize risks to press freedom across the continent.”

The conference is being sponsored in part by the Future Media Lab., a think tank hosted by the European Magazine Media Association (EMMA).

“The Future Media Lab. operates as an open platform where media professionals, journalists, tech innovators and politicians meet to discuss the future media landscape across Europe,” said Max von Abendroth, founder of the Future Media Lab. and Executive Director of EMMA. “Press freedom – and the threats against it – is an increasingly important issue in Europe and the Future Media Lab. aims to continue the conversations started in Wroclaw in the debates we will be running in Brussels.”

Following the conference, a publication will be produced in order to help stimulate debate on this topic in a wider network. The outcomes will also be fed into existing formats hosted by participating organisations, such as the Future Media Lab.’s “Future Media Lounge” sessions in the European Parliament in September 2016.