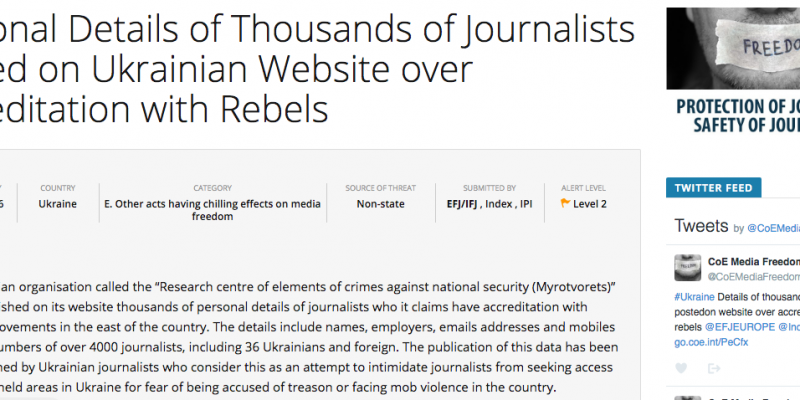 
A Ukrainian organisation working on national security published thousands of personal details of journalists on its website on 7 May claiming the journalists had accreditation with pro-Russian separatists in the eastern Ukraine. It further accused them of ‘co-operating with terrorist organisations’ and violating Ukraine law.

The private contact details published by Myrotvorets (“The Peacemaker” in English) include names, employers, email addresses and phone numbers of over 4,000 journalists and media workers based in Ukraine. It includes both local and international media, such as AFP, Le Monde, Al Jazeera, BBC, CNN, Gazeta Wyborcza, Kyiv Post, New York Times and Reuters. Myrotvorets, the “Research centre of elements of crimes against national security”, is believed to have close links with Ukrainian security services.

Ukrainian journalists are outraged by the publication of the data, considering it an attempt to intimidate journalists who seek access to report on pro-Russian-held areas in the country. Journalists are afraid of being accused of treason or facing mob violence.

Ukraine’s Prosecutor General’s Office announced on 11 May that it had launched an investigation into the data leak.

Media reports say the deputy head of Ukraine’s information ministry has asked those responsible to shut down the website without any success yet.

IFJ President Jim Boumelha said: “The publication of the private personal details jeopardises not only journalists but also puts their families at risk. This intimidation prevents journalists from reporting freely from the conflict area.”

EFJ President Mogens Blicher Bjerregaard said : “We know that some journalists on the list already faced threats. We call on Ukrainian authorities to guarantee the safety of all journalists in Ukraine. They should not be harassed just for doing their job”.

“This is a very alarming development which could further endanger the safety situation for journalists,” said OSCE Representative on Freedom of the Media Dunja Mijatović. “Journalists report on issues of public interest and they should not be harassed for doing their job.”

the Council of Europe Platform to promotion the protection of journalism and the safety of journalists and to the Mapping Media Freedom project.

Picture : Submission of the case to the CoE platform