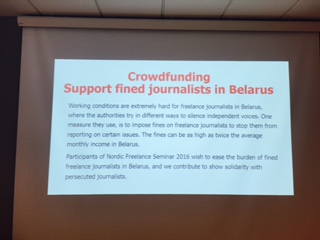 
The Norwegian Freelance Journalist Union (NJ Frilans) hosted the Nordic Freelance Seminar, which is held once a year,  in Ilsetra, Norway on 20-22 May. The over 100 participants were freelance journalists from EFJ affiliates in Finland, Denmark, Sweden and Norway. The aim of the seminar was  networking and sharing experience, discussing recent trends both regarding ever more precarious working conditions for freelances and new technological tools to advance storytelling and journalism by getting closer to the audience.

Frank Aarebrot, professor of comparative politics at the University of Bergen in his opening speech adviced the community to demand public funding to pay for essential quality  and investigative journalism and  legal protection. He said legal and economic safety is key to maintain journalism as a public good. In his view there is a real threat that the future of content is moving to commentary and not news.

In a panel discussion with  Head of NJ Freelance: Anette S. Andresen, FREG member Natasha Lopez, head of Freelance Riks (Sweden), Head of Norwegian Union of Journalists Thomas Spence, Head of The Danish Union of Journalists Lars Werge and Renate Schroeder, EFJ Director, panellists all stressed the importance of unions defending freelances and employed staff like-wise and working together. In Norway, there is a break through in the negotiations for a new modern collective agreement which shall for the first time include some framework conditions for freelances. Spence added that besides collective bargaining, legal support, training and bridging to employees are essential to improve the working conditions of freelances. Lars Werge said that precarious status of freelances is rising at full speed in Europe but also in Denmark and unions have to face social dumping but also new threats such as robots doing journalistic work. Natasha Lopez said that young people, in particular freelances are losing trust in unions. There is still a lack of know-how among the unions how to service the ever more fragmented groups; how to best protect freelances, who cannot go on strike and how to fight competition authorities. Renate Schroeder said throughout Europe young journalists in the majority start their career as “precarious” freelances  and in most cases they cannot make a living from journalism alone. She highlighted some best practice from affiliates who are slowly but surely integrating freelances’ needs in their union action programmes. She also referred to the work of the EFJ Freelance Expert Group.

A panel on persecuted journalists moderated by the EFJ discussed the great challenges journalists face in different countries, including Belarus, Yemen, Gaza and Chechnya. Their courage and professionalism was praised by all participants. A crowdfunding campaign was launched to support freelance journalist in Belarus, who continue to get high fines because of working as freelances (see picture).

A highlight was the presentation by Guardian editor Jon Henly about new ways of story telling. He outlined the “tremendous tools” digital journalism has given us. He said, “open journalism is effective; beneficial and emotional”. more about speakers, see: https://www.nj.no/filestore/ENGFrilansseminar2016program.pdf

Freelance storytellers have to build own digital brands – learning from the pros #nordicfreelance pic.twitter.com/pFod24kohW