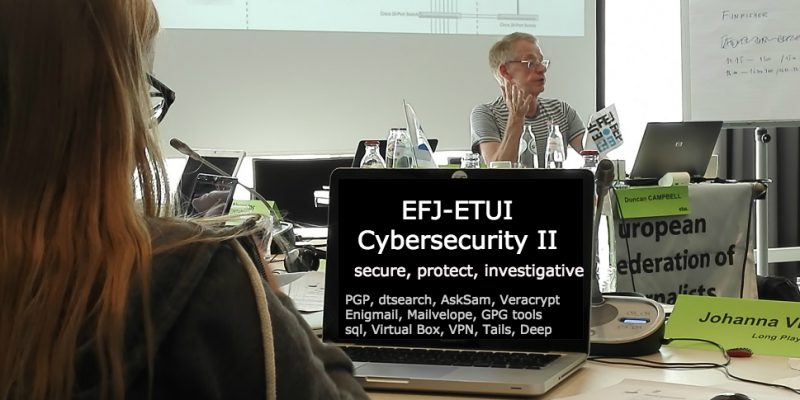 
The European Federation of Journalists (EFJ) and the European Trade Union Institute (ETUI) have successfully organised a 3-day training (25-27 May) in Leuven (Belgium) on Cybersecurity for journalists : Secure, protect, investigate. This was the second edition of a course organized 2015 along four days about Cybersecurity for journalists and with the same practical approach. The course aimed to facilitate technical skills to journalists helping them to protect themselves, their work and their sources.

13 journalists and / or unionists coming from 11 countries took part to the training, with an important participation of participants coming from countries of the South East of Europe (Montenegro, Serbia, Cyprus, Turkey, Bulgaria, Romania) but also from the North East (Denmark, Finland, Poland) and the South West (Spain, France).

Main objectives of the course are :

The investigative journalist Duncan Campbell (member of the NUJ, EFJ affiliate) exposed the structure and dynamic of a master-class about challenges that journalism faces in an era of surveillance and recording and about mining, forensic and big data. Using VPN, processing cloud computing and setting virtual computers were shown to participants. He alternated his explanations with some moments for questions and answers. The work in plenary took the longest part of the day followed by a last session dedicated to a group work about 4 different journalistic scenarios (Moldavia, Russia, France, Pakistan) based on real examples were participants had to debate and find answers to the problems.

The big differences between journalists and intelligence agencies  are that journalists work to bring the information to the public opinion, their methods are subject to ethical standards and their targets will read and respond to their reports. (Duncan Campbell)

The second day, the sessions were organised by the expert Alain Jennotte (journalist at Le Soir and member of AJP, EFJ affiliate) in 3 parts concerning the security of accessing platforms (Keepass), security of communications (PGP keys) and security of contents (Veracrypt).

Stealing passwords doesn’t necessarily need computer intervention. If a hacker is able to read your post-it on your desktop, use educated guess (birthdays, simple texts), try social engineering based on your social profiles, try dictionaries or use brute force, there is a great chance that your security will be compromised if you don’t use strong passphrases (Alain Jennotte)

The last day, the sessions were dedicated to the presentation of 3 cases studies (Denmark, Finland and France) by different participants.

Disclaimer : This 3-day workshop on Cybersecurity for journalists was organised by ETUI-EFJ thanks to the financial support of the European Commission (EC). All responsibilities regarding the contents and the actions belong to the authors only and should not be considered as reflecting the views of the European Union.