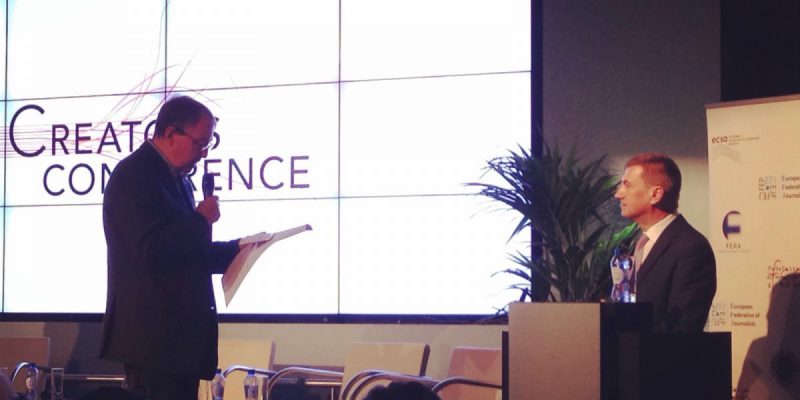 The Creators Conference 2016 concluded on Tuesday 31 after a productive day of panels, interviews and speeches by prominent artists, experts and policy makers discussing the current issues faced by the European creators’ community and the cultural and creative industries.

The Authors’ Group welcomed European Commission Vice-President Andrus Ansip in charge of the Digital Single Market for a keynote speech in which the Commissioner confirmed the “need to look closer at the conditions for remunerating creators and getting a fair share of the value generated”. Vice-President Ansip also stressed the “follow the money approach” and “widening access to content” for consumers as key elements to fight piracy, as well as the challenges related to online platforms. As for the latter, Vice-President Ansip stressed the “plan to ensure a level playing field” and to “adapt existing rules to similar and comparable services”.

The Authors’ Group took the opportunity to present Commissioner Ansip with its newly adopted declaration ”Towards a modern, more European copyright framework and the necessity of fair contracts for creators” (available here) in which the unified different cultural sectors’ creators call the European Commission to take action for fair remuneration, fair contracts and transparency in its upcoming copyright legislative proposal.

The different sessions of the day prompted lively discussions about artistic freedom, digital opportunities, and fairness in authors’ contracts as well as sustainability in the exploitation of authors’ works online, where European creators shared their views and experience of the digital shift.

Experts and policy makers shed light on possible developments of the cultural and creative industries, and recognised that authors have found their rightful place in the current debate on the copyright legislative framework review.

Held under the High Patronage of the European Parliament and supported by the Creative Europe Programme, the high-level event brought together over 200 participants to reinforce the dialogue between creators, consumers and EU policy makers about European authors’ essential needs with regards to their rights and the digital future.

About the Authors’ Group

The Authors’ Group represents more than 500 000 authors, including composers, film directors, journalists, literary translators, songwriters, screenwriters and writers in Europe. Members of the Group are ECSA (European Composer & Songwriter Alliance), EFJ (European Federation of Journalists), EWC (European Writers’ Council), FERA (Federation of Film Directors in Europe) and FSE (Federation of Screenwriters Europe). The Authors’ Group’s main objective is to ensure that the voice of authors is taken into account in the framework of the modernisation of EU copyright rules, particularly with regards to fair contractual conditions for authors and fair remuneration for the exploitation of copyright protected works.

Patrick Ager (on behalf of the Authors’ Group)

Pamela Morinière (on behalf of the EFJ)