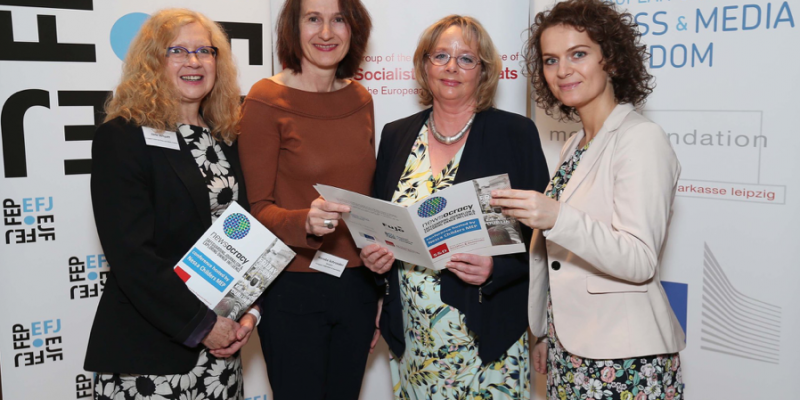 
(Dublin, 3rd June, 2016) The conference discussed the current state of journalism in Ireland and Europe and was hosted by MEP Nessa Childers from Ireland. Renate Schroeder outlined the threats on the independent status of journalists in Europe expressing great concern about the precarisation in the media as well the increasing attacks from both political and economic forces. Losing trust in journalism with journalists who no longer have time to check information or self-censor because of fear to lose the work or be attacked is the main challenge today, she told  about 100 participants in Dublin. NUJ Ireland General Secretary Seamus Dooley discussed the problems related to media ownership in Ireland.

The Irish media industry is dominated by a small group of companies whose core values are those of the market, who increasingly views journalists as “content providers” and journalism as “data” to be shared in the most commercially advantegeous manner”, said Dooley.  He also referred to a ruling from the former Irish competition authority which targeted freelance journalist while failing to curb the issue of media mergers.

Today in Geneva the Irish government is being called to explain why freelance workers, including journalists , are denied the right to collective representation, in breach of  the ILO Convention, he said.

Flutura Kusari, media lawyer from the ECPMF,  gave a worrying overview about the state of play of defamation laws and protection of sources and whistleblowers across Europe.

The afternoon session discussed the role of social media for digital democracy.

Nessa Childers said in her concluding words that journalist are working under unbearable precarious working conditions, from zero contracts to no contracts  and have to be supported in their important work.  She will organise another conference, this time on media bias, she concluded.

The conference was funded by the Group of the Progressive Alliance of Socialists and Democrats in the European Parliament and  the European Centre for Press and Media Freedom (ECPMF) in partnership with The European Federation of Journalists.