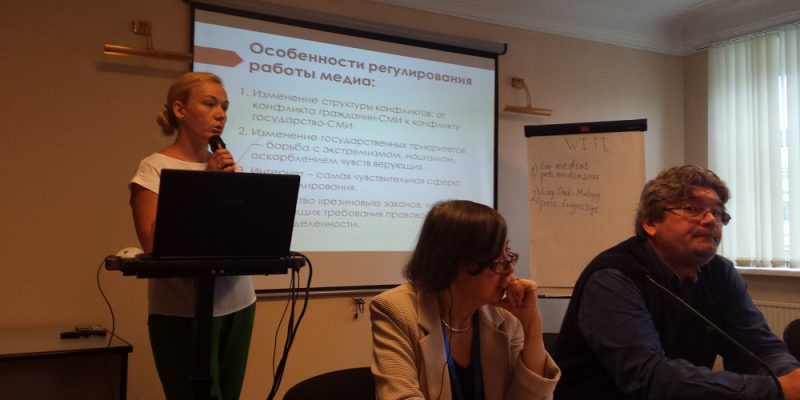 
A group of European Union journalists and editors have met their Russian counterparts in St Petersburg on Monday and Tuesday at a seminar entitled “The Role of Editorial Standards in Safeguarding Independent Journalism”. The meeting was hosted by the Russian Union of Journalists (RUJ) with support from regional journalistic organisations and media outlets, in association with the European Federation of Journalists (EFJ). The event is part of an initiative spearheaded by the EU Delegation to the Russian Federation.

The president of RUJ, Vsevolod Bogdanov, and the head of press and the official Spokesperson for the European Union Delegation in Russia, Soren Liborius, opened the meeting. The seminar focused on challenges to independent and quality journalism posed by technological advances and growing political interventions in digital space. In its recent book “Journalism at Risk” (2015), the Council of Europe stresses that independent, high-quality journalism is more necessary than ever, and yet it is facing new threats and challenges in digital age. 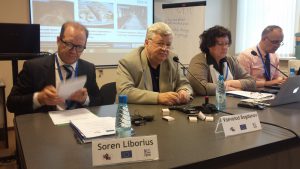 The General Secretary of the EFJ, Ricardo Gutiérrez, stressed the responsibility of editors and journalists in dealing with the dissemination of hate speech online. He reminded that censorship is never the right answer to hate speech: “I welcome the latest UN resolution on the protection of human rights on the internet, reaffirming that the same rights that people have offline must also be protected online. I strongly welcome the fact that attempts to weaken the resolution led by Russia and China were rejected”, said Ricardo Gutiérrez.

He also criticized Dmitry Kiselyov, the director of state-run news agency Rossiya Segodnya, for his anti-Western and homophobic propaganda. The GS of the EFJ congratulated Alexandr Gorshkov, editor-in-chief of the independent online newspaper Fontanka.ru for its brilliant investigation into the activities of Russian mercenaries in Syria and Ukraine. “We need more journalism based on facts,” he said. “Recent scandals, such as LuxLeaks and the Panama Papers, show the vital role of online cooperation between journalists.”

Svetlana Kuzenova from Voronezh-based Mass Media Defence Centre showed the huge extent of the censorship of the Internet in Russia. Following the reports from the Centre, almost 1,2 million websites are currently blocked in Russia, including 470.760 websites unlawfully blocked.

Director-General of the regional publishing house “Alta-press”, Yuri Purgin, presented a successful case of transition to the digital mode of operation without compromising ethical and professional standards.

The Vice President of the EFJ, Nadezhda Azhgikhina, raised the need to promote the culture of dialogue, pointing out the successful dialogue between Russian and Ukrainian unions of journalists, under the auspices of the OSCE Representative on Freedom of the Media, Dunja Mijatović.

Small teams of journalists who came to attend the seminar, visited several prominent media outlets in St Petersburg (including the Fontanka.ru newsroom) on Monday to discuss their editorial policies and their approaches to new technological challenges.

The event in St Petersburg is the second in a series of meetings organised by the EU Delegation to the Russian Federation in the framework of a project for 2016 to promote dialogue between journalistic communities and foster better mutual understanding of the EU and Russia. At the first such meeting held in London in April this year and devoted to the safety of journalists in digital age, the UK chairman of the Association of European Journalists (AEJ) William Horsley, told the audience that growing threats to their safety emanating from digital technologies constituted a new hostile environment that required journalists to up their game in the struggle to defend independent journalism and those who practice it against growing adversity.

Two more meetings – one in Brussels and one in Moscow – are planned later this year as part of the EU initiative.