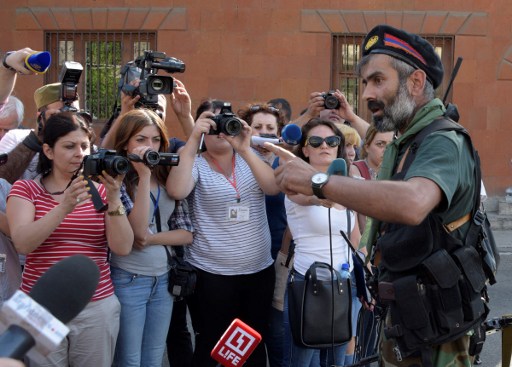 
The European and International Federation of Journalists (EFJ/IFJ) condemn the violence used by police forces against journalists covering a demonstration in Yerevan, Armenia, on 29 July. At least ten journalists suffered burns, bruises and injuries.

The media workers injured in the latest clashes include three journalists of Radio Liberty’s Armenian service Karlen Aslanyan, Hovhannes Movsisyan and Garik Harutiunian; journalists of CivilNet and A1+ TV; journalists of 1in.am website Mariam Grigoryan and cameraman David Harutyunyan; the correspondent of Armenia TV Aghvan Asoyan and cameraman Albert Galstyan; the journalist of Lragir.am Marut Vanyan; and the cameraman of the Russian Life TV, according to local media reports.

The director of RFE/RL’s Armenian broadcasting service claimed that unidentified plainclothes police officers targeted and attacked the Radio Liberty’s three journalists with batons, smashed their equipment and tore off their press badges, forcing them to abandon a live broadcast from the spot. A journalist and cameraman of A1+ alleged that they were forcibly removed from their company vehicles, beaten, and also had their press badges violently torn off.

Protests have been ongoing in Armenia since 17 July, when armed men from the radical opposition group Sasna Tsrer occupied a police station in Yerevan’s Erebuni district, demanding political concessions from the government. Public support in favour of the radical group’s demands grew into a wide protest movement in Yerevan, until the Sasna Tsrer gunmen were forced to surrender on 31 July.

Armenia’s special investigative service opened an investigation into police actions on the night of 29 July and the police announced an internal investigation. Armenian President Serzh Sargsyan said: “I also apologise to the journalists for the events which took on the night of 30 July; during these events it was our greatest blunder. Certainly, conclusions will be made.”

The case was submitted to the Council of Europe platform for the protection of journalism and the safety of journalists.