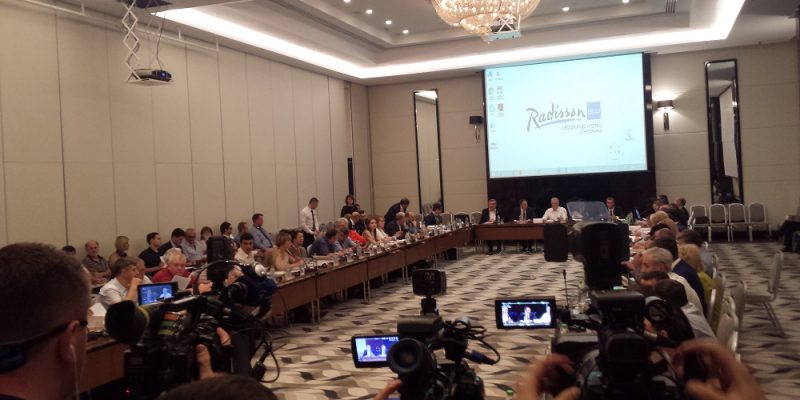 
The European Federation of Journalists is strongly opposed to restrictions on foreign broadcasters in Moldova. The amendments to the Audio-visual Code under consideration by the Parliament in Moldova run counter to international standards on media freedom.

On 7 July, the Parliament adopted, in the first reading, amendments to the Audio-visual Code of the Republic of Moldova. The amendments proposed by the Liberal Party and the Democratic Party, members of the ruling coalition, aim to limit broadcasts in foreign languages or those originating from abroad.

Ricardo Gutiérrez, the EFJ general secretary, participated to a public debate organised by the chairman of the Parliament of Moldova, Andrian Candu, in Chisinau. “I fully understand the need to counter Russian propaganda in Moldova, he said. Propaganda corrodes democracy by manipulating public opinion. But democracy also requires a strong protection of freedom of expression, including regarding information or ideas that offend, shock or disturb the State or any section of the community”.

The EFJ GS reminded that the representatives of Moldovan government signed, on 13 April, the recommendation of the Council of Europe for the protection of journalism. “This recommendation calls on public authorities to protect the right for the citizens to receive information. States should not take measures that make access to information more cumbersome. They should not implement arbitrary restrictions which may become a form of indirect censorship”.

“The adopted recommendation reminds also the need to safeguard pluralism in the media. States have a positive obligation to guarantee pluralism in the media sector, which entails ensuring that a diversity of voices, including critical ones, can be heard… Censorship has no place in a democratic society. Any response to propaganda should not rely on restrictions on media content or outlets. The appropriate response to propaganda should instead focus on fostering media pluralism, ethical journalism and public debate,” said Ricardo Gutiérrez, calling on the Parliament to reject draconian restrictions on media contents.

The OSCE Representative on Freedom of the Media, Dunja Mijatovic, sent a letter on 23 July to Andrian Candu, noting that “a number of the proposed provisions were excessive and not in line with the best international practices.” “Il is difficult and often counterproductive to try to limit certain speech (propaganda) by excessively restrictive legislation. The provisions banning broadcasts or rebroadcasts of certain content from states that are neither EU Member States nor Members of the European Convention on Transfrontier Television appear excessive and may be ineffective”.

The Council of Europe also expressed concerns about the proposed amendments: “Vague and restrictive provisions may easily amount to censorship.” The CoE expert, Dr Bissera Zankova, calls on the Moldovan Parliament to better design the amendments in order to guarantee the protection of freedom of expression and freedom of broadcasting.