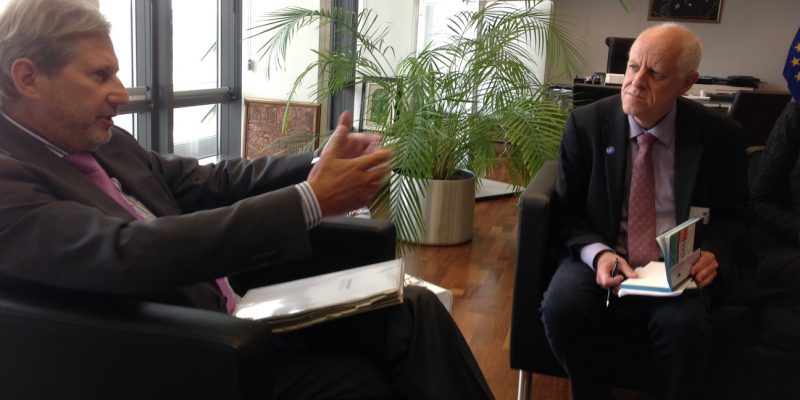 
A delegation of the European Federation of Journalists (EFJ) met with Johannes Hahn, EU Commissioner for European Neighbourhood Policy & Enlargement Negotiations yesterday (05/09/2016) to discuss how to improve working and social conditions for journalists and how to foster high quality public service media (PSM) and media pluralism in the Western Balkans.

“Unions are currently not playing the role they should play in Eastern Europe. The EU should support them and initiate social dialogue between stakeholders in the media industry”, said EFJ President Mogens Blicher Bjerregård emphasizing the need to empower journalists unions in this region. A concrete proposal mentioned was to organise “trilateral meetings” between social partners and governmental representatives to facilitate social dialogue in the media sector. “Employers, employees and governments should be able to meet together in order to sign agreements”, said the EFJ President.

The meeting focused on the issue of public service media and its importance for the whole media landscape in the region, the need for media pluralism and sustainable business models enhancing journalists’ employment conditions and quality of news. “The importance for unbiased information and the respect for the rule of law go hand in hand’” said Commissioner Hahn appreciating the efforts delivered by the EFJ and its national affiliates to enhance independent journalism and capacity building of professional organisations.

The worrying situation in Turkey regarding press freedom and the measures taken against a high number of journalists were also addressed. Both Commissioner Hahn and the EFJ agreed to cooperate, including NGOs and other EU institutions, in order to explore ways to help journalists and media workers affected by this situation and to support media freedom in Turkey.