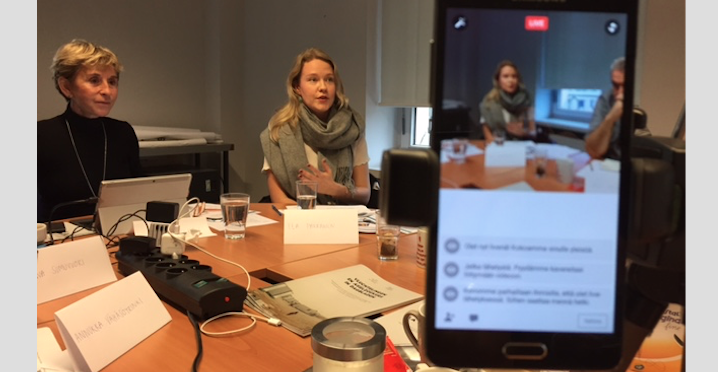 
More solidarity among journalists is needed to improve the rights of freelancers working in conflict zones and to support the work of local journalists on the ground, agreed the participants of the workshop “Interpreting crisis: Reporting on Migration, Asylum Seekers and Syrian conflict”.

The event took place on 24 October 2016 at the IFJ-EFJ headquarters in Brussels and was co-organised by the European Federation of Journalists (EFJ), the Finnish Institute in London, the Finnish Cultural Institute for the Benelux, Felm and MDI.

The participants were concerned that the leading newspapers are not sending their own correspondents, not even using reports from local journalists. “It is inadmissible that editors of leadings newspapers buy photos and articles from young freelance journalists, who are risking their lives in the battlefield, without offering training and insurance for them,” said one participant.

Referring to the Charter of Roma and Charter of Idomeni initiatives and EJN’s report on migration, EFJ General Secretary, Ricardo Gutiérrez, highlighted “the importance of ethics and the commitment to use the appropriate wording when reporting on delicate issues”.

During the session, conclusions of two reports Refugees and asylum seekers in press coverage and Syria in Global Media were analysed covering the way quality papers in Europe talked about the refugee issue. The need of more contextualization to explain the facts and avoid the Eurocentric vision is mentioned in the conclusions of the reports and discussed by participants. The report was carried out by the Finnish Institute in London and the Finish Cultural Institute for the Benelux.

“Syria in Global Media” report pointed that media often report according to their home country’s geopolitical position. Leading headlines preferred to highlight violence and terrorism instead of human stories, the report concluded.
“The polarization of the news has locked the Syrians and the international community in a reductive position – pro regime or against it – in which the speech becomes more radical because the journalists take part of one or the other side,” pointed Aziz Hallaj, coordinator of the Syria Initiative at Felm. “As a result, forgive the other part. This reductive situation also leads to the lack of coverage for minorities.”