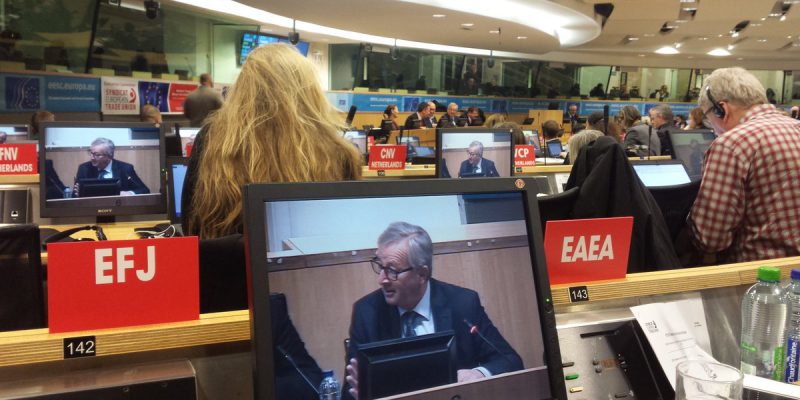 
The European Trade Union Confederation (ETUC) welcomed European Commission President Jean-Claude Juncker for a discussion on the future of Europe with trade union leaders from all EU countries. The discussion took place yesterday, in Brussels, during an extraordinary Executive Committee meeting of the ETUC. The European Federation of Journalists was represented by its General Secretary, Ricardo Gutiérrez.

The ETUC believes a wide debate on the future of Europe is desperately needed due to the growing lack of trust in the EU caused by high unemployment and poverty, Brexit, terrorism, the failure to deal effectively with the refugee emergency, and growing nationalism and populism across Europe.

European trade unions warn that the EU must become fairer and more social, or it risks collapse.

TOn its “Platform on the Future of Europe”, adopted on the 26-27 October, the ETUC propose a new Pact based on prosperity, social justice and democracy.

The ETUC believes the EU needs to focus on

“The ETUC is engaging with the EU institutions and national Governments, and with wider society, to influence the future of Europe and to achieve a fairer and more social Europe,” said ETUC General Secretary Luca Visentini.

“It was really interesting to discuss with Jean-Claude Juncker, but we are still unhappy with his lack of commitment on social protection,” said Ricardo Gutiérrez. “We are facing an EU Commission President refusing to implement at EU level sectorial frameworks agreements! We are facing an EU Commission President expressing concerns regarding the increase of jailed journalists in Turkey! The EU needs to act, not only to express concerns!”

.@VisentiniLuca to @JunckerEU at @etuc_ces ExCom meeting: "Regarding the situation in #Turkey, please do something"

Thanks to @VisentiniLuca who mentioned the cases of #journalists in jail in #Turkey at @etuc_ces ExCom, asking @JunckerEU to do something

ExCom of @etuc_ces today: @EUROCADRES & @EFJEUROPE will raise the issue of the protection of #whistleblowers pic.twitter.com/acoU7kaL0f