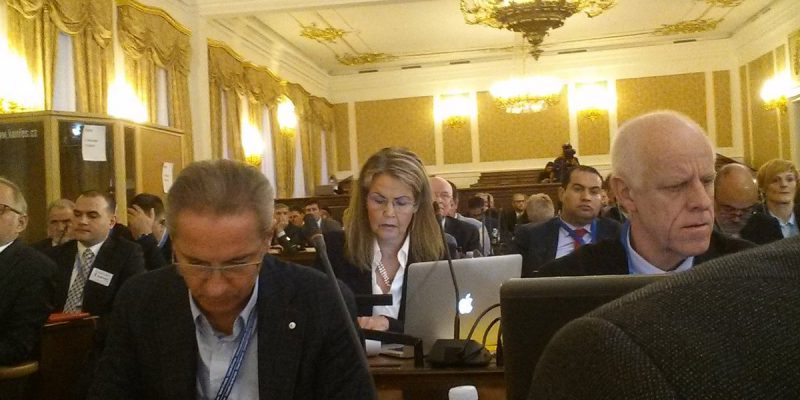 
Over 100 delegates from 19 countries in Central & Eastern Europe (CEE) and beyond came together in Prague last week to discuss the need to protect the independence and sustainability of public service media (PSM) in the face of numerous challenges. The conference was hosted by the Czech Parliament in Prague, and organized by the Council of Europe, the Parliamentary Assembly of the Council of Europe, Czech Television and the European Broadcasting Union (EBU).

Public service broadcasters, Parliamentarians, regulators, diplomats, academics and experts from a range of organisations including the Council of Europe, Venice Commission, OSCE and the European Federation of Journalists, met for two days of debate on how to ensure PSM is allowed to operate and develop independent of political control. The EFJ was represented by its President, Mogens Blicher Bjerregård, and its General Secretary, Ricardo Gutiérrez.

The conference called on Parliaments to find the ‘political will’ to protect PSM and use their strength and influence to enforce the existing international instruments protecting freedom of expression.

Media freedom cannot be guaranteed without sustainable funding and many countries, such as Bosnia and Herzegovina, struggle with the lack of stable and adequate funding and antiquated collection systems. Participants agreed that governments must guarantee sustainable funding for PSM, ideally collected via a licence fee so it remains accountable to citizens and not Parliamentarians.

Independent governance for PSM is another essential. Members of supervisory bodies should have a definitive mandate, that does not change depending on who is in power, and be able to exercise their duties free of political interference.

The conference also looked at how PSM can combat hate speech – both preventing it being broadcast and putting in place measures to contextualise it and demonstrate its noxiousness. PSM’s role is to champion social inclusion and cohesion and ensure a diversity of views and a culture of tolerance.

The participants at the conference adopted a set of conclusions and recommendations on the way forward that will be widely shared with multiple stakeholders, including at the European Commission’s annual colloquium on Media Pluralism and Democracy this week.

Participants also adopted three statements on the worrying situation regarding media freedom in Turkey, where many journalists are detained, and the situation of PSM funding in Romania and Bosnia and Herzegovina.

.#PSM2016 Prague adopts a statement highly concerned about the detention of journalists and closing of media outlets in Turkey @EFJEUROPE

.@Dunja_Mijatovic points out the culture of denial of governments regarding their lack of support to #MediaFreedom#EBUConf#PSM2016

Reminder:
"States should ensure the independence and sustainability of public-service media"#EBUConf#PSM2016https://t.co/3UncSd1KhQ