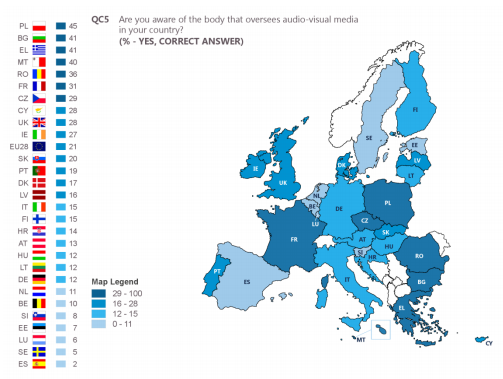 
The results of the 2016 Eurobarometer survey on “Media pluralism and independence” published today (17/11/16) – just in time with the EU Annual Colloqium on Fundamental rights on “Media pluralism and democracy” – show two worrying trends: a majority of EU citizens believe that the media in their countries lack independence ; and 75% of the respondents have experienced hate speech on social media.

This survey aims at representing the state of media pluralism and independence across the European Union. The results highlight that, according to the Europeans, there is much work to be done in ensuring the independence of national media – a vital cornerstone of a democratic EU.

In 9 Member States, majorities agree their national media provide information free from political or commercial pressure. There is a big contrast between Northern and Southern countries: in Finland (78%), the Netherlands and Denmark (both 61%) this view is the most prominent, while respondents in Greece (12%), Spain (24%) and Cyprus (25%) are the least likely to agree.

However in Finland (65%), Sweden, the Netherlands (both 55%), Denmark (54%), Germany and Slovakia (both 50%) a majority of respondents think their national public service media are free.

Most of respondents (69%) are not aware of the body that oversees audiovisual media in their country. 10% said they are aware but could not give the correct name of the body.

On a more positive note, 2/3 of the respondents say that national media provide a diversity of views. Moreover, radio is the most reliable media for 66% of the respondents, TV and newspaper comes next with 55% both. Far fewer respondents consider social media to be reliable (32%). 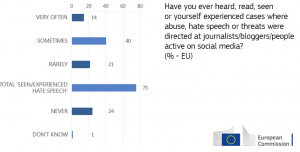 Yet a slight majority (53%) follows debates on social media by reading articles on the internet or through online social networks, even though 61% never took part in these debates. However, 3/4 of these respondents have experienced (heard, read, seen) hate speech, abuse or threats directed at journalists or people active on social media.

EFJ President Mogens Blicher Bjerregard said: “These results show that States failed to comply with their commitment to ensure media independence and pluralism as required in the EU law and the Charter of Fundamental Rights. This commitment is also part of the CoE Recommendation on the Protection of Journalism they signed on 13 April 2016.”

”National governments must take important measures in order to reverse the trend. They should show commitment to do so during the European Commission’s review of the Directive regulating audio-visual media by strengthening the role of national independence regulator. ”