12 media professionals killed in Europe in 2016 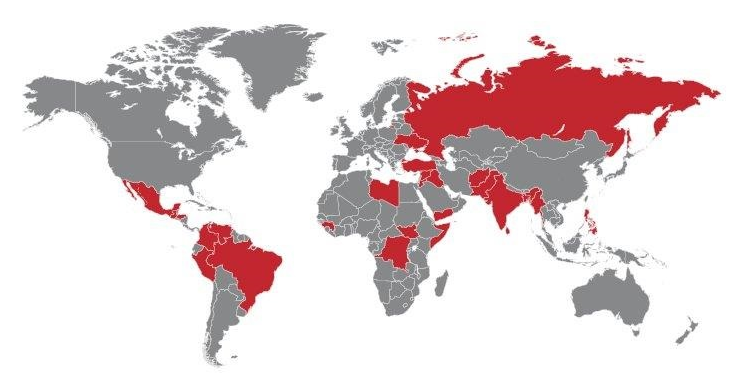 
A total 93 journalists and media professionals were killed in 2016 in the world, out of which 12 in Europe, according to new statistics published by the IFJ, the world’s largest journalists’ organisation. The International Federation of Journalists (IFJ), which represents 600.000 members in 140 countries, today published

a list of 93 journalists and media staff who were killed in 2016 in work-related incidents. A further 29 died in two plane crashes.

Although the figures for 2016 are down on previous years the IFJ has warned against complacency citing reports of rising threats, intimidation and self-censorship as evidence that attacks on freedom of expression remain at critical levels.

In addition to the 93 targeted killings, 20 Brazilian sports reporters perished in a plane crash over the city of Medellin in Colombia, a country where for the first time in many years no killing was recorded this year, against three listed in 2015. 9 Russian journalists were killed in a military plane crash.

The figures for 2016 are down from 112 in 2015, with decreases in killings in a number of countries including Honduras (1), Libya (2), the Philippines (3) and South Sudan (1). However, the levels of violence were higher in Afghanistan, Guatemala, Iraq and Mexico, countries in the grip of terrorist extremism, armed conflict and organised crime. Yemen, India, Pakistan and Syria form another group which saw little or no change in the numbers of killings from last year.

“Any decrease in violence against journalists and media staff is always welcome but these statistics and the continued deliberate targeting of media workers in many incidents causing loss of life give little room for comfort nor ground for hope to see the end of the current media safety crisis,” said IFJ President Philippe Leruth.

“These levels of violence in media should spur into action all those committed to protecting journalists. There must be no

impunity for those crimes. The IFJ and its affiliates around the world will redouble efforts to mobilise for credible steps to remove the shadow of violence over journalism.”

The devastating terrorist attack on the French satirical magazine Charlie Hebdo at the start of 2015, was mirrored by another attack in January 2016 aimed at causing massive loss of life in Afghanistan when the Taliban attacked a staff van of TOLO TV and killed seven journalists and support staff, after declaring the TV station as a military target.

The IFJ compiles the annual list of journalists and media staff killed from information from its affiliates and other credible sources, after having established a clear or reasonable link between the killing and the professional activity of the victim. While every effort is made to consider all cases that are publicly known, the list does not pretend to include all killings of journalists and media staff.

The IFJ is aware of journalists who have gone missing and are feared killed but there is not enough information to determine that they have been killed. One case in point is the disappearance of Burundian journalist Jean Bigirimana whose whereabouts remain unknown almost six months after he went missing.

“The number of journalists and media staff killed for doing their work could be higher if it weren’t for lack of credible information on these missing cases and for the self-censorship by journalists in some countries to avoid drawing the unwelcome attention of crime barons,” added IFJ General Secretary Anthony Bellanger.

“There is therefore urgency in pressing governments to investigate all forms of violence, including killings and disappearances in a speedy and credible manner to protect the physical integrity and professional independence of journalists.”

According to IFJ records, the Arab World and Middle East has the highest killing tally with 30, followed by Asia Pacific with 28 killings, Latin America with 24, Africa 8 and Europe with just three killings.

The statistics on journalists and media staff killed in 2016 are as follows:

As of 29 December 2016, the IFJ recorded the following cases of killings:

Countries with the highest numbers of media killings are: