#SpreadNoHate: how to tackle hate speech against migrants and refugees? 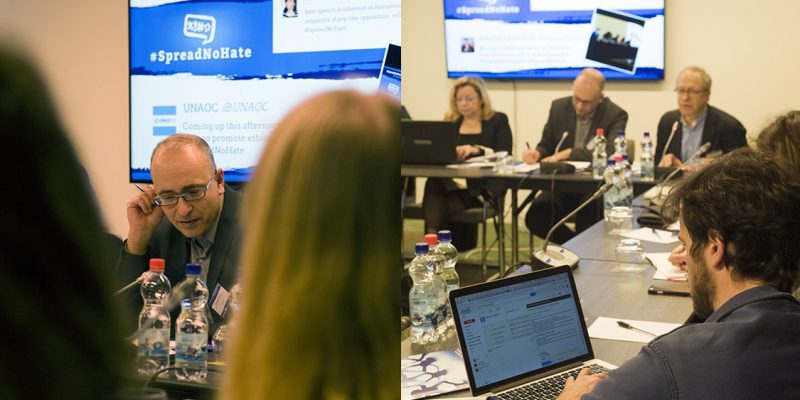 
The European Federation of Journalists (EFJ) was invited on 26 January to participate in the high-level debate “#SpreadNoHate: Hate Speech Against Migrants and Refugees in the Media” organised in Brussels by the United Nations Alliance of Civilizations (UNAOC) and the European External Action Service (EEAS).

This event was aimed to better understand the mechanisms of hate speech against migrants and refugees as well as exploring new ways to improve the quality of media coverage, by promoting ethical journalism and fostering dialogue between journalists, institutions and organisations.

EFJ General secretary Ricardo Gutiérrez moderated the panel on “Strengthening Partnerships between Media and Civil Society to Promote Balanced Narratives”. “I understand the need for journalists to be balanced, but I don’t like the idea of promoting so-called positive narratives,” he said. “That sounds a bit like promoting a kind of counter-propaganda, with the support of NGOs and civil society organisations. Journalism is not about that. As journalists, our main duty is to tell the truth. Journalists should be the watchdogs of democracy. Our mission is to publish stories that hold institutions accountable, including NGOs and civil society organisations.”

Here are the five key recommendations highlighted in the different sessions throughout the day:

The need to work towards a more fact-based narrative migration was also highlighted on Wednesday 25 during a conference organised under the framework of the EUROMED Migration IV (EMM4) at the Press Club Brussels. During that day, the first edition of the Euro-Mediterranean Migration Media Award was announced as well as the main findings and recommendations of the study “How do media on both sides of the Mediterranean report on migration“, commissioned to the Ethical Journalism Network (EJN), to be published in February.

As a journalist, I don't like the idea of promoting so-called "positive narratives". Our duty is just to tell the truth!#SpreadNoHate

My reminder for journalists using the inappropriate words: No human being is illegal#SpreadNoHate#mediaagainsthate pic.twitter.com/CfFSER3Hsj