Salaries unpaid since December for journalists in Macedonia 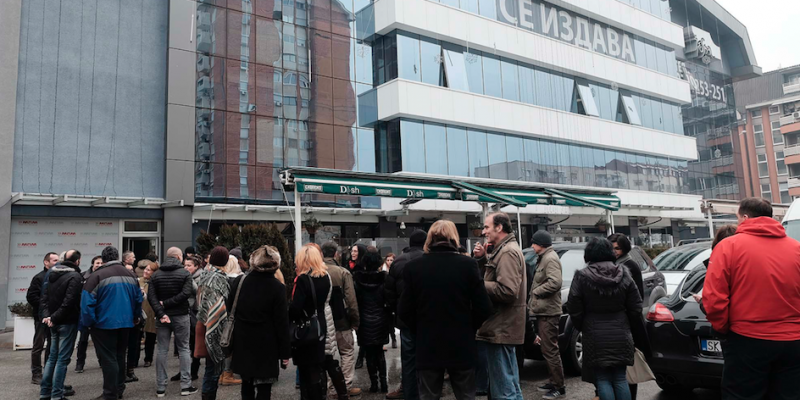 The journalists working for Utrinski and Dnevnik published by Media Print Macedonia (MPM) are to strike with the support of SSNM (Trade Union of Macedonian journalists and media workers, EFJ-IFJ affiliate) after the company failed to pay their wages for 2 months, although the level of their salaries is very low.

“ Every work deserves a compensation. It is totally unacceptable that workers who delivered the job are left without salary for more than two months now. What’s happening is against the international law and Macedonian employers are gravely infringing the international obligations. How can the colleagues do their job properly if they are not being paid ? The readership and others in the journalistic community should support this struggle because workers’ rights are being violated and the public’s right to have access to information is being affected. We stand in solidarity with our colleagues.”, said EFJ-IFJ.

In protest against their working conditions, last week media workers at Utrinski and Dnevnik newspapers have started sessions of 30 minutes breaks in front of the management offices (see pictures). On February 17th, they will officially strike if no agreement has been reached with the management of the newspapers. As an important sign of professional solidarity, journalists and media workers from Vest decided to join their colleagues of Utrinski and Dnevnik in their decision to strike. So far there has not been any sign of the employers seeking to make contact with the SSNM.

The Executive Board of SSNM and the union representatives of SSNM`s union groups in the newsrooms of the daily newspapers Dnevnik and Utrinski Vesnik under ownership of the Service Company Media Print Macedonia DOOEL – Skopje decided to go on a srike.

The decision for a strike was made because the salary for December has not been paid yet, including the health insurance benefits, and all attempts for a meeting and negotiations have been ignored by the management.

The problem with the salaries persisted for several months. The Union made attempts to find a solution with the management, but despite all their promises very little was done to the benefit of our members and the employees` outrage resulted in a decision to go on a strike.

The employees from the abovementioned media suffered salary cuts, dismissals justified with the poor economic situation in the country and decreased newspaper circulation. During all that time, the company offered no proof that the management team also suffered financial repercussions.

In the meetings with the management, SSNM constantly warned that the decrease in the circulation was not a result of poor journalistic work but of the poor management which destroyed the credibility of the newspapers which once were leaders in the print media and real creators of public opinion.

The  decision for the strike, its commencement and the manner of its conduct in accordance with the provisions of the Labor Relations Law were delivered to the MPM management.