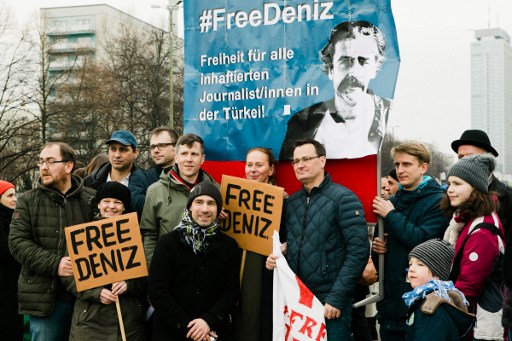 German daily Die Welt correspondent in Turkey Deniz Yücel was taken into custody on 14 February following reports on Turkish Minister of Energy Albayrak’s hacked emails. Mr Yücel, who holds both Turkish and German citizenship, is accused of being a member of a terrorist organisation, spreading propaganda and misusing information, charges refuted by the defendant as well as media organisations.

Since the end of December, six other journalists working for Turkish news outlets have been arrested supposedly in connection to the RedHack leaks. The leaks, led by the hacker collective RedHack and acquired from the private email account of Energy Minister Berat Albayrak, – who is President Erdogan’s son-in-law – revealed media outlets’ control and the use of fake Twitter accounts to favour the ruling AK party.

Foreign reporters usually enjoy more freedoms in Turkey than local journalists but Turkish authorities reportedly choose to treat dual-citizen holder Yücel as a Turkish citizen, rather than a German.

Under the ongoing state of emergency, Deniz Yücel could be held in police custody for up to 14 days without a hearing before a judge. The European Federation of Journalists (EFJ) and its German affiliates are calling for his immediate release.

“Deniz Yücel is a journalist, no terrorist. He has, as it is his task, investigated and reported about a cyber- attack on the Turkish Minister of Energy Albayrak, through which information about the control of Turkish media companies and the influence of the public via fictitious twitter-accounts was made available to the public. This is not a crime, but his work”, said Cornelia Haß, chair of the dju in ver.di.

The German Federation of Journalists (Der Deutsche Journalisten-Verband (DJV) criticised the behavior of the Turkish authorities. It shows that President Erdogan misuses the state of emergency in order to prevent critical reporting”, said DJV-chair Frank Überall. “We expect from the German Government to take up the case and use its diplomatic channels in order to protect our colleagues.”