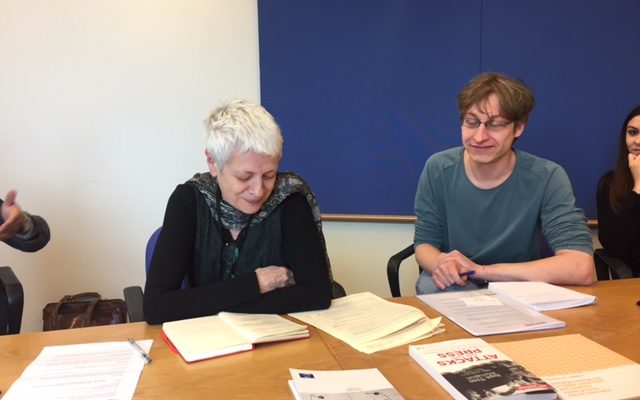 
The European Federation of Journalists (EFJ) and press freedom groups met yesterday (11/05/2017) with Italian MEP Barbara Spinelli, Civil Liberties, Justice and Home Affairs (LIBE) Committee, who is the main rapporteur for an upcoming own initiative report on media freedom. Tom Gibson from the Committee to Protect Journalists, EFJ director Renate Schroeder, Giovanni Melogli from the International Alliance of Journalists and Julie Majerczak from Reporters Without Borders pointed out the importance of monitoring media freedom, solving the issue of self-censorship, strengthening media pluralism, boosting media literacy and finding more efficient law enforcement at European level when it comes to attacks against journalists and media. The Council of Europe Platform to promote the protection of journalism and safety of journalists was highlighted as a very useful tool.

“We need to define problems of the press, such as governmental interference and corporate control,” said Spinelli, a former journalist herself, and proposed that free press should be helped by public subvention and independent monitoring of press freedom.

Schroeder stressed the problem of self-censorship, which was recently presented in a report by the Council of Europe.  Gibson highlighted the chilling effect of defamation and libel. He added that we need to promote media diversity and recognizing the leading role of the journalists to hold governments accountable.

For that media literacy in the society is crucial, said Melogli. “We also need to distinguish what is enforceable in the European Union and how best to deal with the systematic violations of human rights,” he added. He referred to the report by Sophia in ‘t Veld on EU mechanism on democracy, the rule of law and fundamental rights.

The meeting, which was also joined by Italian MEP Curcio Maltese’ office and policy advisors from LIBE, also discussed the crisis of precarious working conditions in journalism, the lack of media pluralism and the financial and political crisis public service media are in. Schroeder drew the meeting’s attention to the need for strong support from the European Parliament for the whistleblower protection.

On 11 July, the LIBE Committee will organise a hearing on media freedom, and the report is supposed to be published after the summer break.

Barbara Spinelli is the co-chair of the Committee on Constitutional Affairs (AFCO), former journalist and one of the founders of Italian newspaper La Repubblica. She is a member of the Confederal Group of the European United Left – Nordic Green Left.