Media Against Hate: Humanity, accuracy and accountability are key principles when covering migration 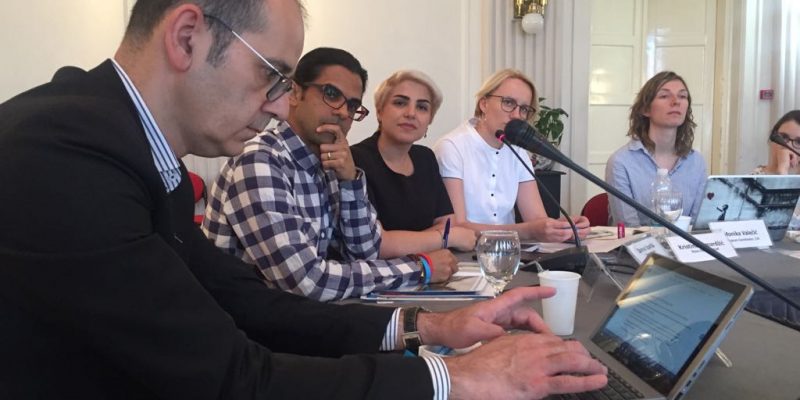 
Twenty-five journalists from 12 countries gathered in Zagreb (Croatia) on 26 and 27 May to attend a workshop on the theme “Reporting Refugees, Migrants, Ethnicity” co-organised by the European Federation of Journalists (EFJ) and the Croatian Journalists’ Association (CJA).

Journalists gathered at the workshop on reporting refugees in Zagreb. #mediaagainsthate pic.twitter.com/KhrkjXHR6I

Croatia had little contact with migrants from the Middle East until 2015. But the country is now welcoming some migrants and the media, as well as the population, are experiencing some difficulties in dealing with it. The participants, all working on migration issues in their own countries, were given a regional outlook of the situation of migration and hate speech in Croatia. Two Iranians seeking refuge in Croatia exchanged with the journalists and recalled the need to follow basic journalistic rules, such as anonymity if requested and transparency about what is intended to do with the reportage, as these mistakes can have important consequences on the persons fleeing the country or their families. Donya and Shayan Spanta also presented the Staze magazine, self-proclaimed “Asylum Seekers’ and Refugees’ Newspaper in Croatia”, in which they give voices to migrants – where media are failing.

A majority of journalists attending the workshop expressed their difficulties in covering such a sensitive topics. “Should we focus on positive stories? How to deal with children? How to find accurate data?” The need to tell the full story and to give facts to faces was addressed by Ann Singleton, researcher at the University of Bristol and Maeve Patterson, communication officer at the UNHCR. Both emphasised the importance of using the right terminology, understanding numbers  and putting facts into context.

As one important outcome of all working groups was the huge need or hunger for training and further training, in particular for freelances who become the front runners when it comes to reporting migration. Training on how to cover minors, on language, on cultural differences, data journalism, on attracting new audiences,on how to best use social media etc..

The workshop took place in the framework of the Media Against Hate project which aims to counter hate speech and stereotypes in the media, through the promotion of ethical standards and fair media reporting. It is funded by the European Commission.