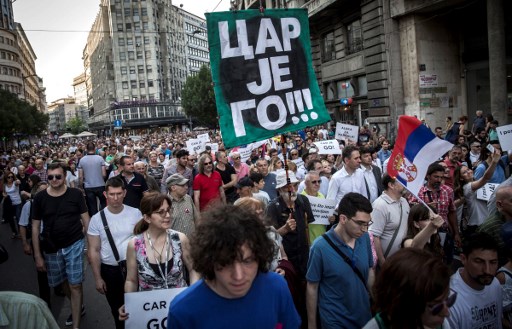 
The European Federation of Journalists (EFJ) joins the Western Balkan’s Regional Platform for Advocating Media Freedom and Journalists’ Safety in condemning the verbal and physical attacks against journalists from Insajder Production, Vice, Radio Belgrade and daily newspaper Danas during the inauguration of Serbian President Vucic on May 31 in Belgrade.

The attacks occurred while Vucic’s supporters and opposition activists started clashing in front of the Serbian parliament. According to media reports, Danas journalist Lidija Valtner was taking a statement of a protester when she was dragged away by two persons holding her by the neck and trying to take her mobile phone away. She explained that two plainclothes police officers watched the attack without coming to her help. Force and verbal attacks were also used to prevent journalists of Vice, Radio Belgrade and Insajder website from reporting the protest.

“The Platform request from the relevant authorities to determine who is responsible for the police forces’ failure to act and protect the journalists,” says a press release co-signed by six journalists’ trade unions and associations in the Western Balkans. The EFJ calls on the Serbian authorities to conduct a swift investigation.

The EFJ and the IFJ will submit the case to the Council of Europe platform for the safety of journalists.