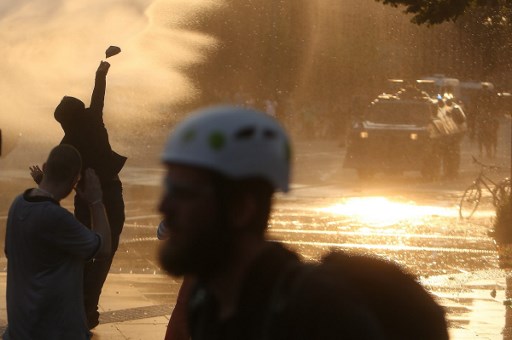 
At least 32 journalists have been deprived of their press accreditations by the German government during the G20 protests in Hamburg held on 7 July. The European and International Federations of Journalists (EFJ-IFJ) join their German affiliates DJV and dju in ver.di in condemning the attacks against the press.

Nine journalists have had their accreditations revoked with an additional 23 placed on a list detailing them as a security concern. Those listed were not present at the G20 Press Center, according to EFJ affiliates.

Government spokesperson Steffen Seibert confirmed the removal of the accreditations but didn’t provide any justification for it.

Media outlet Weser Kurier has filed an objection to the Federal Press Office after their photographer Rafael Heygster had his accreditation revoked. Born Kietzmann, dju in.verdi member, has also spoken out against the removal of his accreditation.

According to German unions’ reports a number of journalists were subjected to verbal and physical abuse from German riot police including threats, beatings and pepper sprayings despite journalists being clearly identifiable.

“The way BKA dealt with accreditations is legally highly questionable,” said Cornelia Hass, chairwoman of the dju in.verdi. Several members have contacted the union since Friday, due to their accreditations being withdrawn.

Reporters of German newspapers Taz, Junge Welt, Weser Kurier and Analyse&Kritik were stripped of their papers, with the identical justification of “safety-related findings”.

One cannot help but think this happened for the reason to prevent disagreeable media coverage,” says Hass. “This procedure defies our democratic principles, therefore we filed an objection with the authorities.”

DJV has called the decision to withdraw press accreditations “entirely arbitrary“.  DJV chair Frank Überall has requested the Federal Office of Investigation (BKA) to not impose any further restrictions on journalists. In a letter addressed today to the BKA, DJV President Holger Münch asked the Office to justify their approach against journalists.

The incidents have been reported on the Council of Europe platform for the safety of journalists.