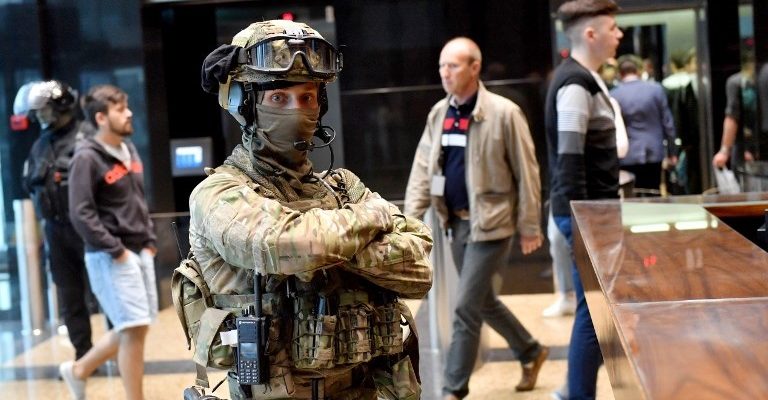 
On July 14, the prosecutors General’s office and the national police searched the offices of Ukraine’s Vesti media group in Kiev which holds Radio Vesti, the daily newspaper Vesti, and the news website Vesti-ukr.com. The raid was conducted as part of an embezzlement case against ex-Tax and Revenue Minister Oleksandr Klymenko.

The whole quarter was blocked off, units of special troops and armored vehicles surrounded the building. Police officers completely obstructed the work of the editorial board. The chair of the Board of Directors of the Media Holding Vesti Ukraine, Olga Semchenko, explained on a Facebook post that the radio station’s live broadcast was interrupted during the operations and the military gathered 30 journalists in a room in order to question them and search their mobile phones.

According to Oksana Semchenko, the searches can be interpreted as the Prosecutor’s revenge regarding a Vesti investigation into Chief Military Prosecutor Anatoly Matio’s income and expenses released under the title of “Who is Mr. Matios? What the Chief Military Prosecutor conceals”. “Government pressure is not new to us, but we haven’t seen such a major special operation yet,” she said.

“The Vesti editorial policy may be the subject of discussion, but is not subject to prosecution,“ reacted Sergiy Tomilenko, chairman of National Union of Journalists of Ukraine (NUJU), one of EFJ member unions in Ukraine.

“Why did the military prosecutor send elite forces to raid Vesti radio station’s office? Why did they search journalists’ mobile phones for contacts and text messages? It seems clear we are facing pure intimidation. We call on again Ukrainian authorities to comply with their own commitment to protect media freedom,” said Ricardo Gutiérrez, General Secretary of the EFJ.

Vesti’s offices have already been subjected to several attacks since 2014 and more recently in February 2017 the National Council for Television and Radio Broadcasting of Ukraine revoked license of the Ukrainian broadcasting company “Radio Vesti” in Kharkiv city and in Kiev.