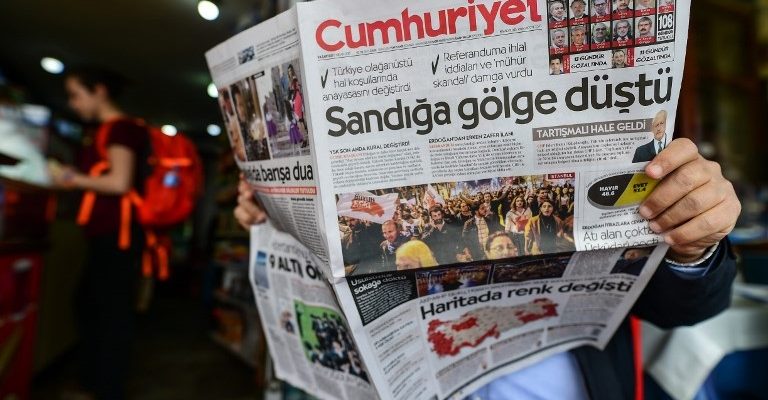 
Representatives from international free expression groups and professional organisations gathered in Istanbul on July 24 to monitor the trial of 17 journalists and executives from the newspaper Cumhuriyet on accusations that its reporting lent support to terrorists.

Prosecutors are demanding prison terms of up to 43 years for the defendants on charges that include “helping an armed terrorist organization while not being a member” and “employment-related abuse of trust”. They argue that the newspaper has acted since 2013 as “defender and protector” of the movement led by U.S.-based cleric Fethullah Gülen – whom Turkey’s government blames for the failed July 2016 coup attempt – and of outlawed militant Kurdish and leftist groups, despite Cumhuriyet’s history of criticising those groups and the groups’ antipathy for one another.

Authorities argue Cumhuriyet exceeded the bounds of free expression by concealing acts of terror groups and that it criticised government policies as part of a “perception operation” to harm the ruling Justice and Development Party (AKP) government and President Recep Tayyip Erdoğan.

However, the indictment charging the journalists and executives focuses almost entirely on news reports and Twitter posts, and rights groups reject the charges as politically motivated. They argue that the case is intended to silence Cumhuriyet, one of the few remaining opposition voices in the country, crossing another significant threshold in the erosion of human rights and rule of law, and of democracy itself, in the purge that has marked Turkey’s ongoing, post-coup state of emergency.

Like many of the other more-than-150 journalists currently behind bars in Turkey, defendants imprisoned in the Cumhuriyet case have effectively faced punishment without conviction, having been held for months in pre-trial detention with arbitrary limits on outside contact and interference with their right to mount a legal defence. Turkey is the world’s leading jailer of journalists, the vast majority of whom were detained in a sweeping crackdown on dissent following the coup attempt.

The state of emergency, which Erdoğan has vowed will continue until Turkey achieves “welfare and peace”, has accelerated the consolidation of government control over almost every segment of Turkey’s society. More than one hundred thousand civil servants have been dismissed or detained, often without due process, and some 170 media outlets and hundreds of civil society organisations have been shuttered.