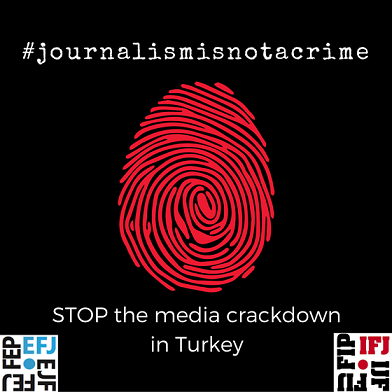 Turkish authorities have arrested 9 journalists and media workers and issued warrants to 26 others accusing them of ties to the Gulenist movement blamed by the government for orchestrating last year’s attempted coup.

According to Turkish state media Anadolu Agency, Turkish police carried out raids today issuing warrants and arresting media workers suspected of using an encrypted messaging app called ByLock, which is supposedly favoured by Gulenists. Journalist Burak Ekici, who works for opposition newspaper Birgun, is among those arrested, accused of “membership of an armed terrorist organization”.

The IFJ and EFJ denounced the repeated accusations of “terrorism” by the government against journalists as baseless and pretexts to silence the free press in Turkey, pledging to stand with our Turkish affiliates in condemning the charges and arrest of our colleagues and demand they be dropped and the arrested be released immediately.