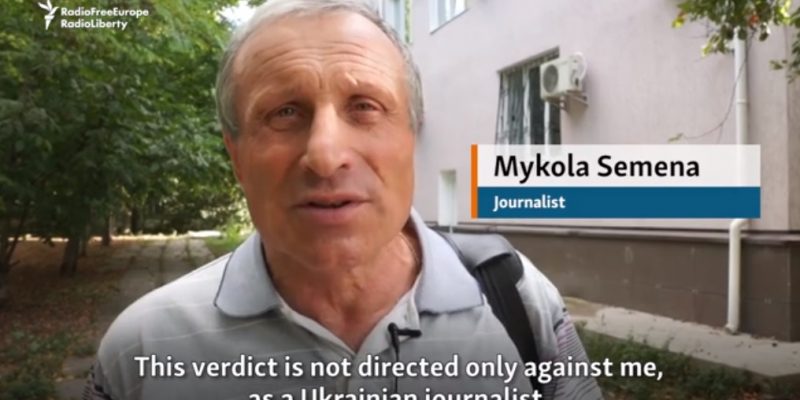 
The European Federation of Journalists (EFJ) condemns the conviction of Ukrainian journalist Mykola Semena by a Crimean court today. The court found him guilty on a charge of separatism and handed him a 2,5 year suspended sentence. He was also barred from “public activities”, including journalism, for three years.

On 19 April 2016, FSB agents in the Russia-annexed Ukrainian region of Crimea raided the house of journalist Mykola Semena, freelancer with Krym.Realii (Criemea Realities) – RFE/RL’s Crimea service. They confiscated his reporting equipment, and briefly detained him for interrogation in connection to a criminal probe on charges of making calls to separatism. He was later released on bail, with travel restrictions.

The separatism charge stems from an article Semena wrote for Krym.Realii website in 2015. The prosecutor charged that the article had called for the violation of Russia’s territorial integrity. Semena has said that Russian authorities based their case on an inaccurate translation of his article from Ukrainian into Russian.

The EFJ General Secretary Ricardo Gutiérrez condemned the verdict today: “Despite the fact that Mykola Semena was not re-arrested, following the suspended sentence, we strongly condemn his conviction. It seems clear that the verdict is politically motivated. Crimean authorities are using charges of making calls to separatism to silence critical and independent voices. That is why the court sentenced him to a ban on practicing journalism for three years.”

Sergiy Tomilenko, chairman of Ukraine’s National Union of Journalists (NUJU), an EFJ affiliate, called Semena’s verdict “a persecution for expressing an opinion.” NUJU will do the utmost to relocate Semena to Ukraine.