Spanish government threatens to take over public media in Catalonia 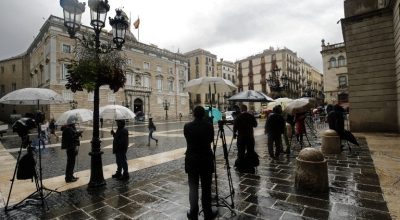 
The media segment of the trade union FSC-CCOO and the journalists’ trade union of Catalonia (SPC-FeSP) strongly condemn the threat of takeover of Catalan public media by the Spanish central government, following the measures announced on Saturday by the Prime minister Mariano Rajoy (People’s party), with the support of the two main opposition parties (Socialist party and Ciudadanos). The European Federation of Journalists (EFJ) joins its affiliates FSC-CCOO and the Catalan Union of Journalists SPC-FeSP in denouncing this inacceptable political interference in dealing with public service media.

This Friday, the Spanish senate could vote a series of measures in application of article 155 of the Spanish constitution, which allows the Spanish government to take over the autonomous communities if they fail to fulfill their obligations or if they have an effect on Spain’s public interest.

The central government would have the power to revoke the current leaders of the Catalan Corporation of the Audiovisual Media (CCAM), which oversees the Catalan public media (the TV channel TV3, Catalunya Radio and the Catalan Agency of Information). According to the central government the measure aims at guaranteeing “a truthful, objective and balanced information, respectful of political, social and cultural pluralism, as well as territorial balance“.

The SPC denounces the “political interference” of the central government and reminds that only the Catalan Parliament is competent to appoint or revoke the Council’s members of the CCAM.

The trade union CCOO highlights the incompatibility of the measures announced by the central government with article 20 of the Spanish constitution, which guarantees the public right to information. In addition, CCOO denounced the presence of State security agents in the Catalan headquarters of the national broadcaster RTVE.

The EFJ reminds that the Council of Europe Commissioner for Human Rights, Nils Muižnieks,  firmly denounced, on 2 May 2017 the attempts to influence the independence and pluralism of the public service media, notably in Poland, Ukraine, Greece, Croatia and in Spain. In particular, he referred to the example of the political appointment process in Spanish public television channels. According to Nils Muižnieks, those practices “show that governments’ attempts to turn public broadcasting into government broadcasting remain widespread.”

“Public service media must benefit the public, not the governments”, said EFJ General Secretary Ricardo Gutiérrez. “Like our affiliates FSC-CCOO and SPC-FeSP, we call on the regional government of  Catalonia and the Spanish central government not to interfere in the editorial management of public media. It is not its responsibility to appoint and revoke members of the managing and supervisory boards of the public media. They must be elected by the qualified majority in the Parliament, following  a transparent procedure, which takes into consideration the professional qualifications and competences. Not their political affiliation!”