EU’s Colloquium on Fundamental Rights addresses women and the media 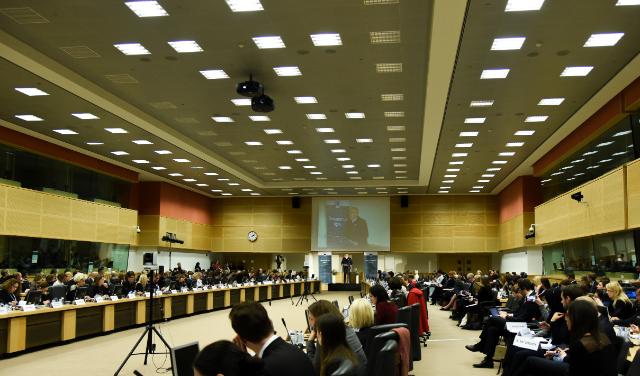 
The EU’s annual Colloquium on Fundamental Rights was held this year on 20-21 November 2017, with the theme of “Women’s Rights in Turbulent Times”. Discussions over the two days raised many issues around journalists and the media.

Discussing the empowerment of women’s voices, Wim Slabbinck, a journalist for Charlie magazine, argued that media pushes girls into corners. “Only 7 % of sports media coverage is about women”, said Katrien Meire, owner of Charlton Athletic.

In terms of coverage of female politicians, Pamela Morinière from the International Federation of Journalists (IFJ) noted that women in politics are not covered in the media as much as men. When they are, they are often asked inappropriate questions, and their family lives and appearances are emphasised more than their politics. Moriniere emphasised that change needs to come from the inside: from Press Councils, equal pay policies and equal access to leading roles, and the organisation and culture of newsrooms.

Online abuse and the role of media was a popular topic. Mary Beard, Professor at the University of Cambridge, opened the Colloquium by stating: “I’m sure that many women receive the kind of abusive tweets that I receive …. to stop me from speaking”. Beard argued that the right to speak means nothing if there is no right to be heard.

Cyber-harassment and cyber-stalking were both problems acknowledged by Iaonnis Dimitrakopoulos, head of department at the EU Agency for Fundamental Rights. Dimitrakopoulos argued that online hatred must be effectively investigated and prosecuted, and education about the online world should be improved. Milena Santerini, deputy at the Italian Parliament, said that there must be more of a reaction to online hate speech which is currently perceived as the norm.

However, Anita Sarkeesian from media educational organisation Feminist Frequency, highlighted the dangers in combatting hate speech online. She noted that prohibiting online anonymity is not the answer, as anonymity is often crucial for investigative journalists and those seen as dissidents. Anonymity online is also necessary for whistleblowers, whom the European Federation of Journalists (EFJ) recently called on the European Commission to protect.

Digital education was agreed upon as an area to help generate change, as well as wider education and the role of authorities and institutions to tackle misogyny in society and in the media.