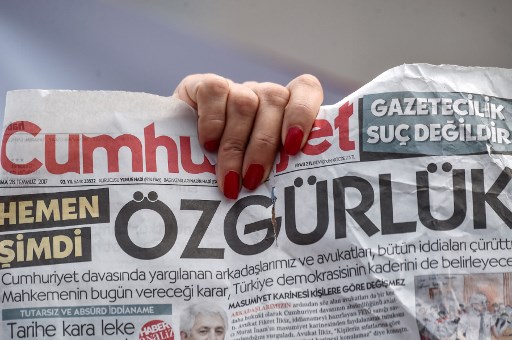 
At a hearing on 25 December 2017, a Turkish judge ordered four journalists and senior staff from the newspaper Cumhuriyet to remain in prison for at least two more months during their trial.

The newspaper’s editor-in-chief Murat Sabuncu, attorney Akin Atalay, correspondent Ahmet Şık and accountant Emre Iper, are charged with supporting through their coverage three outlawed groups: The Kurdistan Workers’ Party (PKK), the Revolutionary People’s Liberation Party-Front (DHKP-C), and the Gülen network. They face up to 43 years in prison if convicted.

The newspaper and staff have denied the charges, and argue that they are being targeted to silence critics of president Erdogan.

Prosecutors argue that Cumhuriyet was taken over by supporters of Fethullah Gulen, the U.S.-based cleric blamed by the Turkish government for the failed coup. However, Şık had previously written a book criticising the Gulen movement, at a time when it was an ally of the government. After the release of the book in 2011, Sik faced over a year in prison.

During the hearing on 25 December, Şık was ordered to leave the courtroom after making political comments. After the break, Sabuncu also refused to give his defense, seeing as Şık could not.

OSCE media freedom representative Harlem Désir repeated his earlier calls for Turkey to free all journalists in prison and drop charges against them.

“I remain greatly concerned by the ongoing trial against the staff of the daily Cumhuriyet,” Désir said. “It has placed significant hardship and despair on the journalists and their loved ones. It has also weakened the public debate and democratic process in Turkey, because it has created a major threat to meaningful journalism and to critical debates in the country.”

The European Federation of Journalists’ (EFJ) affiliates in Turkey (TGC, TGS, DISK Basin-Is) were present at the hearing.

The EFJ have been monitoring the case against Cumhuriyet journalists since the beginning. Some of the defendants have already been detained for 14 months, and will remain in prison until the next hearing on 9 March 2018.