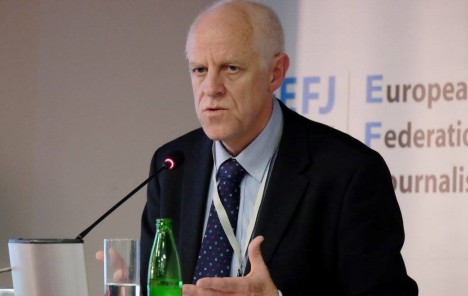 European institutions continuously emphasize that independent journalism and free media are fundamental pillars for our European democracy. Thanks for that, but it is not only words that are needed but also more political will, not only from institutions such as the Council of Europe and the EU, but also firmly and unconditionally from national leaders. We want to hear from the highest authorities that independent journalism must thrive.

Strong support from all parties is a prerequisite for the safety of journalists and for fighting impunity, fighting “fake news”, developing mechanisms to defend journalists’ rights, including authors’ rights, and for improving investigative and independent journalism.

The EU has just set up a high-level group with the EFJ on board, to deliver ideas on fighting “fake news” before May this year. Later in 2018, the EU will make its final decisions on the copyright directive, and hopefully with some of our fingerprints as we have now worked on that for three years. The next step will be to develop mechanisms to urge tech giants like GAFA (Google, Apple, Facebook, Amazon) to contribute to the content from which they make money. This could be done through an authors’ rights remuneration system.

Let’s make 2018 a year for solutions such as mechanisms for a safer environment for journalists where perpetrators are brought to justice. There is a need for more social dialogue across Europe, including for freelancers, better payment for journalists to underpin independent and investigative journalism. And we need stronger organizations for journalists attracting more journalists to be on board. By standing together and by mutual understandings of our different and pluralistic European culture, we can continue to make a difference. The EFJ is well prepared for this!

I wish you all a 2018 with journalism that matters,