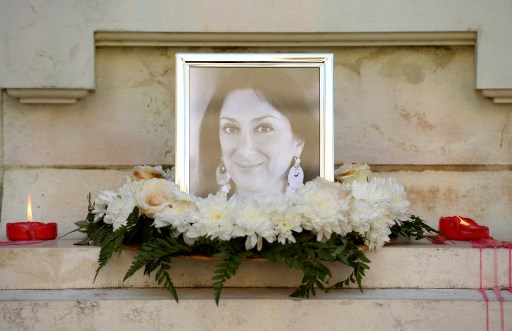 
The undersigned organisations, partners of the Council of Europe Platform for the Promotion of Journalism and the Protection of Journalists, are deeply concerned over the lack of progress in the investigation into the murder of Maltese journalist Daphne Caruana Galizia. The authorities have announced the arrests of three suspects in connection with her murder, but there remains a widespread belief that those who ordered this crime have not yet been identified.

Daphne Caruana Galizia was murdered in a car bomb explosion on October 16, a few meters away from her home. Her death raised concerns not only about protection of critical journalists but also about the rule of law and corruption in Malta.

More than three months after the journalist’s brutal murder there are no public indications to suggest that the authorities have identified the people who commissioned, planned or orchestrated the murder.

“investigations must be effective to maintain public confidence in the authorities’ maintenance of the rule of law and to prevent any appearance of collusion in or tolerance of unlawful acts.”

The Guidelines also recommend that “investigations should be subject to public oversight, and that the victim’s next of kin must be involved in the procedure to the extent necessary to safeguard their legitimate interests.”

We believe that, given the profile of the crime and the issues of corruption Daphne Caruana Galizia had worked to uncover, the investigation into her assassination demands the continued scrutiny of the international community. We join Daphne Caruana Galizia’s family in calling on the Parliamentary Assembly of the Council of Europe to appoint a special rapporteur to monitor the ongoing murder investigation and make an assessment of the contextual circumstances that led to her murder.

The killing of Daphne Caruana Galizia demonstrated the dangers which journalists around Europe faced last year.  The co-signatories of this call to action also express concern regarding several worsening press freedom trends.  These conclusions are based on a compilation of cases of serious threats to media freedom and journalists’ safety reported on the Council of Europe Platform for the Promotion of Journalism and the Protection of Journalists.

In 2017, we submitted 130 alerts concerning 29 countries, confirming last years’ trends (more details online: https://www.coe.int/en/web/media-freedom) of the wide geographic spread of threats to media freedom. In 79 alerts (60%) in 2017, the State was the source of the threat. Fewer than 30 percent of the alerts passed on to Member States in 2017 received a State reply. All Platform alerts have been verified by Council of Europe Partner organisations and they all deserve a reply and, we believe, appropriate follow-up action as well.

The alerts consist mainly of attacks on physical safety and integrity of journalists (23%), harassment and intimidation (23%), and detention and imprisonment (21%).

Impunity remains one of the single biggest challenges to the protection of journalists. It includes 15 cases of murders of journalists and numerous cases of threats and other types of intimidation and harassment which were not investigated by State authorities.  We call on Member States to adhere to the Council of Europe’s Guidelines on effective investigations to bring perpetrators of such crimes to justice, and wider measures needed to end impunity.  We also ask them to continue to support the work of the Platform, in partnership with international press freedom organisations.

Read here the report and the statement.