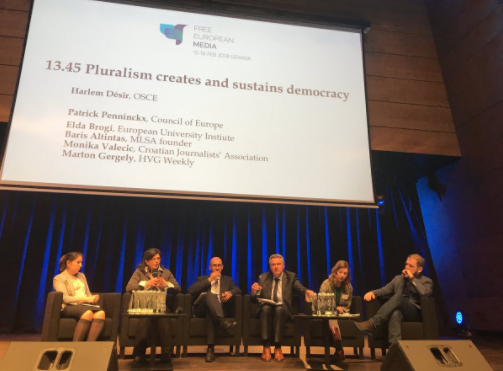 
This is the welcoming speech given by Mogens Blicher Bjerregård, president of the European Federation of Journalists (EFJ), at the conference “Free European Media” which took place in Gdansk, 15-16 February 2018.

Distinguished hosts, colleagues, partners, guests – welcome to this conference that is a part of a larger program focusing on the increasing conflict between media and politics that we witness recently.

The organisers for this conference are European Federation of Journalists, the Council of Europe, the European Centre for Press and Media Freedom, the International Press Institute and the Nordic Journalism Centre.

This conference should not be seen as just another conference. At the end of the conference tomorrow, we will come up with recommendations for the way forward.  The debate book as part of the conference would help spread the message and reach out to citizens. Because this topic is not something

Free European Media is a fundamental pillar for democratic societies, and European citizens shall take part in the development of our democracies.

Therefore, I am very pleased and grateful, that the European Solidarity Center, the City of Gdansk and the Pomorski Region have offered us this symbolic venue for our event. You may remember the people here in Gdansk had once built their democracies following many other countries in the former East-bloc during the communist time. I was here in the early 90’s cooperating with Polish journalists who were proud of the new media they created to support new democracy in Poland.

Decades later I went back to Poland both when the public service tv started outsourcing production of their programmes – even parts of the news room. Only  two years ago, the situation went from bad to worse as the government created a new media law giving them the power to control the public service media. At that time, I was in Warsaw.

Today the media situation in Poland is not just a warning of what’s going to happen when populism takes over our democratic values. The day after the new interim media law was signed, the management in the public service media was replaced. The next day, so as the journalists. Recently the private tv-channel TVN was tried and fined 400.000 € because of its coverage of a demonstration against the government. These are just two examples and both events have a chilling effect on media freedom.

The political interference is totally unacceptable and dangerous for a democratic country . Therefore, it must be brought to an end.

Later today we will have the chance to hear more about Poland during the panel discussion.

We are here today and tomorrow to have a broader view at the state of media in Europa in a political environment that seems to be more and more hostile towards free media and journalists.

Take a look across Europe. Just south of Poland, Czech Republic has developed another cocktail of poison for media:

We should continue raising the awareness of the situation in Hungary where the media legislation has led to more state control and regulation in the total opposite direction of what we stand on – self regulation.

North of Poland you have got the happiest country in the world. However, in the state of Denmark we are facing dramatic cuts in public service media with proposals up to 25 per cent. Look at Switzerland waiting for a referendum on abolishing the media reception fee. It will take away the fundamental right for citizens to be informed and take part in democratic debate

When states start to interfere in the media it can easily get worse:

Tomorrow Matthew Caruana Galizia will speak. October last year, his mother was brutally killed in Malta. The court is working now, but will the mastermind be found and punished? It is a duty for any state to bring the perpetrators to justice so to avoid more attacks on journalists.

Turkey and Azerbaijan are representing two countries, where media freedom de facto is in prison. More than 150 journalists are behind bars either for false accusation or simply because their jobs as independent journalists.

When we in other countries like Serbia, where I recently visited on a fact-finding mission, see a big number of journalists being harassed and threatened. We know what this will lead to. Therefore, I in Serbia used the opportunity to urge the president and representatives from the government to give media and journalism its full support without any conditions.

Press Freedom is a fundamental pillar for democracy, and we must remind ourselves and our political leaders, what the alternative will bring. We have seen it in its worst case three times during the last century. Remember that it starts each time with the control of words. Therefore, let me use the opportunity here to send a firm message to all European leaders: Stop all attacks on journalists and media. Let free, independent and pluralistic media thrive. Therefore, we expect from our political leaders, full support for Press Freedom. Full stop.

In connection with this conference we have launched a debate book with chapters on different topics until now from nine European countries. You can read them online and you can order it and get it in a printed version after the conference.

We will continue this debate.

We stay on what we believe in and urge for: