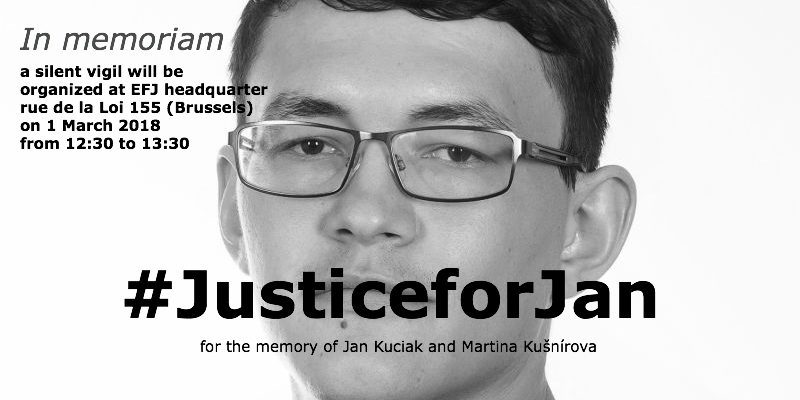 In order to honor their memory, a silent vigil will be organized by Jan Kuciak and Martina Kušnírova’s friends and colleagues outside the International Press Center at Residence Palace, rue de la Loi 155 (Brussels) on Thursday (1st of March 2018) from 12:30 to 13:30.

The European and International Federation of Journalists (EFJ/IFJ) are deeply shocked to learn of Jan Kuciak‘s death, a 27-year-old Slovakian reporter working for “Aktuality.sk” news portal. His body was found on 25 February alongside his partner Martina Kusnirova at their home in Velka Maca, some 65 kilometres from the capital Bratislava. Slovakian police launched a murder probe on Monday 26 February 2018.

Kuciak’s reporting focused mainly on allegations of tax evasion and fraud involving high-ranking officials and tycoons. Police commander Tibor Gaspar said this morning that the murder was “most likely related to the investigative work of the journalist”.

According to media reports, the last story he wrote involved businessman Marian Kocner, known for his real estate deals. He allegedly threatened to expose “any dirt” he could find on Kuciak or his family, according to an article by Kuciak’s editor-in-chief Peter Bardy published in September 2017.

According to the Organized Crime and Corruption Reporting Project (OCCRP), Kuciak had also been working  on an investigation that delved into the infiltration into Slovakia of the Ndrangheta mafia, one of the world’s most powerful and fearsome criminal groups.

The Journalists’ trade union in Slovakia, Slovensky Syndikat Novinarov (SSN), an EFJ-IFJ affiliate, said: “We take this murder as an unprecedented act against investigative journalism and free media in Slovakia. We call on the authorities to enforce the law and investigate the murder of these two persons. All attacks against journalists in our country must stop.”

EFJ President Mogens Blicher Bjerregård added: “I am deeply stunned by this sad news coming from an EU country, which happens only a few months after Daphne Caruana Galizia’s killing. If the link to his death due to his investigative work is proven, this would be a very worrying signal for journalism in the European Union. We urge the authorities to resolve the case and make sure that the mastermind is brought to justice. Top leaders in Slovakia to shall firmly stand up for press freedom and to end impunity. My deepest thoughts and sympathies are with the relatives of the victims.”

IFJ General Secretary Anthony Bellanger said: “The murder of young journalist Jan Kuciak for motives that seem to be work related is a deep blow to press freedom. We urge the police authorities to bring the perpetrators of Kuciak’s killing to justice.”