New project to promote human rights based journalism in Turkey 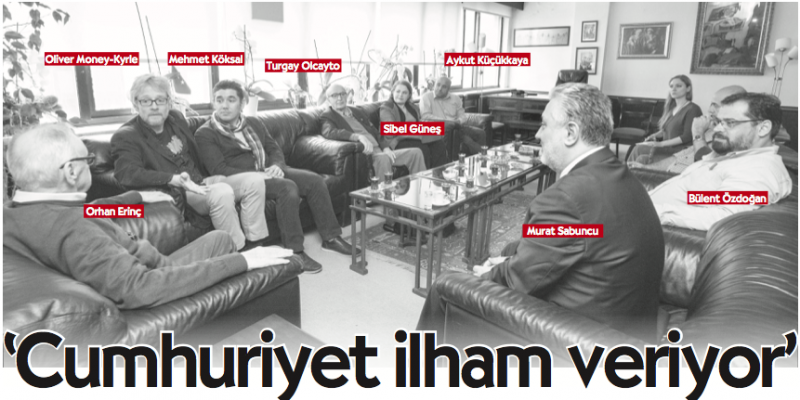 
“Cumhuriyet, as one of the most important daily newspaper in Turkey, is playing a great inspirational role for all journalists in the world and by putting your own life at risk to tell the truth in the country, you attract more respect and become an example for many of our colleagues and we would like to thank you for that”, said Oliver Money-Kyrle, IFJ Assistant General Secretary during a joint solidarity visit in Istanbul to the former imprisoned journalist Murat Sabuncu (editor in chief of Cumhuriyet). The joint delegation for the solidarity visit included representatives from the International Federation of Journalists (IFJ), the European Federation of Journalists (EFJ) and their affiliates Türkiye Gazeteciler Cemiyeti (TGC), Türkiye Gazeteciler Sendikasi (TGS) and DISK Basin İş who met with Cumhuriyet journalists Murat Sabuncu, Orhan Erinç, Bülent Özdogan, Aykut Küçükkaya and Faruk Eren.

Thanking all the organisations for their support, Murat Sabuncu replied “we will be more happy when all the others will be released. Every single support or solidarity message received in jail was the source of our hope for a better future. The supports given to jailed journalists by TGS, DISK-Basın İş and TGC were therefore very important and relevant. In jail, I’ve understood even more the importance of being organised in a workplace. I was kept in solitary confinement in jail for a year and I can’t express how happy I was to meet with TGC representatives in jail. It’s mostly thanks to your supports that I was able to leave the prison in a healthy situation. There are many groups willing to support the development of democracy through solidarity networks. We love this country and we believe in its future, we want this future to be democratic and progressive”, he said.

Turgay Olcayto (TGC President) underlined “the importance of international soldarity for Turkey. We thank you for following all the cases and monitoring the press trials. One of the most important issue now is the state of emergency that should be lifted immediately”.   Orhan Erinç (President of Cumhuriyet Foundation) added that “solidarity is indeed very important for the press. I remember when in 1971 I was at that time the President of the journalists union (TGS), the IFJ’s Annual Meeting was scheduled in Istanbul but some of the delegates were against because the meeting shouldn’t take place in a country without democracy. We managed to convince them that it will be very important to hold the meeting in Turkey to support the development of democracy in the country and it was agreed”. 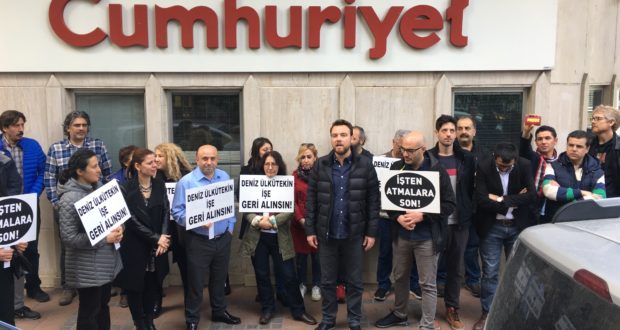 As a side event, the EFJ-IFJ took part to the TGS protest to support one of his member and union representative at the newspaper who was recently fired by the Cumhuriyet management without explanation. Many media workers at the newspaper are currently afraid that the newpaper management will announce a massive redundancy plan to sack 70 employees.

The EFJ-IFJ visit to Istanbul was also marked by the kick-off a new project called Organising Turkey’s human rights based journalism fit for the digital age financially supported by the European Union. Based on the network and the strength of their affiliates, the federations are aiming to improve working conditions, to provide solidarity and to train journalists in Turkey through five specific work packages covering various aspects of the media environment.

The objective of the project is to promote and protect fundamental rights through enhancing the role of journalist in promoting democracy and good governance and the public’s right to access information.