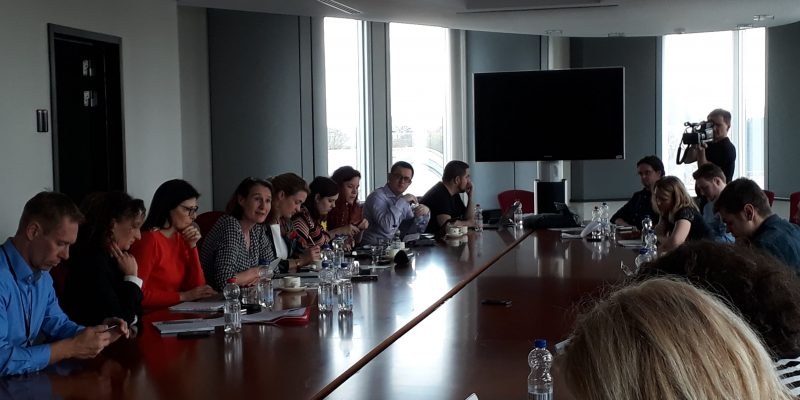 
The director of the European Federation of Journalists (EFJ), Renate Schroeder met with a group of Slovak journalists from various Slovak media on 11 April in the European Parliament to discuss the current situation of journalists in Slovakia and what must be done to better protect (investigative) journalists.

Pauline Ades-Mevel outlined the increasing violence and verbal attacks against journalists, and in particular cyber violence against female journalists which are spreading across European countries. The situation at the public service broadcaster RTVS with smear campaigns against journalists  is of great concern to both RSF and EFJ.  Renate Schroeder explained with the second murder of a journalist in a European member state the atmosphere has changed. Press freedom must be high on the international agenda and the time for action is now. Nora Wehofsits announced the launch of a new ECPMF fund to support EU investigative journalism. All speakers stressed the importance of solidarity among journalists at this moment.

Many Slovak journalists were concerned about what they can do to address the toxic atmosphere against journalists created by politicians in their country, specifically whether they should remain impartial in the aftermath of murdered Slovakian journalist Ján Kuciak or be more engaged. Renate Schroeder emphasised the importance of media literacy which is low in Slovakia compared to other European countries. She gave the example of German news rooms which opened their doors to the public last year in order to promote transparency and re-establish trust in the media. Media ownership by Slovakian politicians is another issue she talked about which needs to be addressed urgently to regain the public’s trust in journalists.  She also raised the issue of the protection of sources for journalists in the wake of Ján Kuciak’s murder. His colleagues believe his freedom of information requests as part of his investigation into corruption in the Slovak government may have been leaked to his murderers by public officials.

Furthermore, Slovak journalists expressed their surprise about the outcry following the murder in Slovakia as well as internationally. They underlined the importance of such meetings to feel international solidarity and support.