Photo exhibition: Journalists’ working conditions in Western Balkans and Turkey is not only about the danger 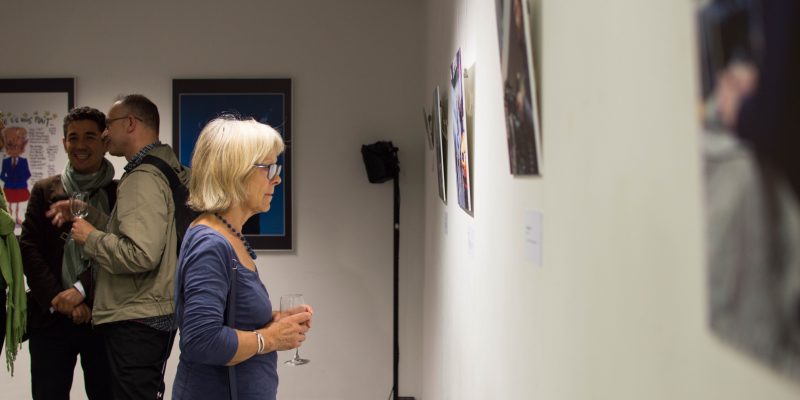 
The life threatening conditions of journalists working in Western Balkans and Turkey is a part of everyday reporting, however, the struggle is not always about the danger, as noted by Renate Schroeder, director of the European Federation of Journalists (EFJ).

The opening remarks were made at the preview of the photo exhibition “Journalists’ working conditions in Western Balkans and Turkey” on the 12th of June 2018, at the Press Club Brussels. The photographs from local photographers and photojournalists depict the reality which tends to be kept behind the lenses of reporting – ranging from being on guard on the field of escalating demonstrations to adjustment to the combination of multi-tasking, heavy work load and outdated reporting equipment. The exhibition will be displayed until the 19th of June 2018.

One of the most captivating shots by Boris Pejović depict the Al Jazeera Balkans correspondent Milica Marinović absorbed in her work on a train tracks, showcasing the routine of a Montenegrin journalist under heavy pressure of multi-tasking, work load and having to carry all the equipment.

However, some journalists are finding ways to ironically represent the conditions, as in a photograph by Ibrahimović Rusmin with a journalist interviewing an ATM, in a intention of criticizing the economic pressure and low wages affecting the editorial independence of reporters.

The photo exhibition is being held in a framework of the project Building trust in media in South East Europe and Turkey (#TrustInMediaSEE), financially supported by the EU and the UNESCO, which seeks to strengthen freedom of expression, access to information, free, independent and pluralistic media, ensuring that journalists and media are key drivers for democratic, sustainable and peaceful development in the region. The project covers Albania, Bosnia and Herzegovina, the Former Yugoslav Republic of Macedonia, Montenegro, Serbia, Kosovo and Turkey.