Turkey : Three newspapers and one TV station closed by decree-law 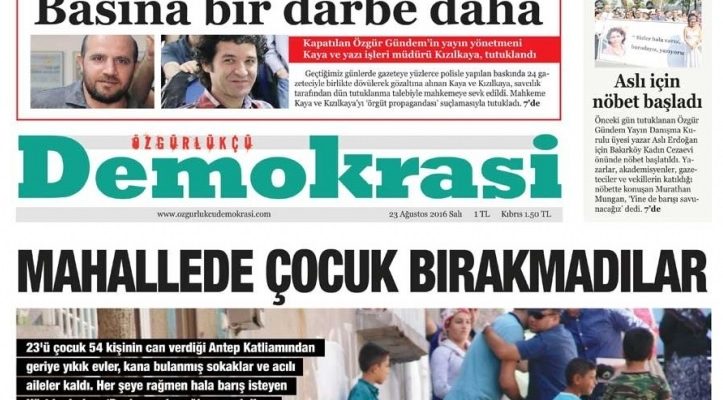 
On July 9, 2019, the Turkish government issued a decree-law firing 18,632 civil servants due to their alleged ties to “terrorist groups” and closing 12 associations, three newspapers and one TV station. The decree also dismissed 199 academics, some of whom were among the signers of the Academics for Peace initiative, which called on the Turkish government to halt military operations in the country’s Southeast, which resulted in hundreds of deaths and some hundred thousand displaced people.

Among the closed newspapers, Özgürlükçü Demokrasi had been seized by the government in March when trustees were appointed to the board. Özgürlükçü Demokrasi, an İstanbul based daily, was the successor of Özgür Gündem, which was closed by a decree in October 2016 over “terrorist propaganda.” Halkın Nabzı, an İstanbul-based daily established in 2013 whose editor-in-chief, İshak Karakaş, had been briefly detained over his protest against a Turkish military offensive in Afrin, northern Syria, was also closed down. Welat, the Diyarbakır-based successor of Azadiya Welat (closed by a decree in October 2016), a Kurdish language daily, was also shuttered by the decree. The assets of the closed associations and media outlets were transferred to the Treasury.