Investigation of Anna Politkovskaya’s murder was inadequate, says the ECHR 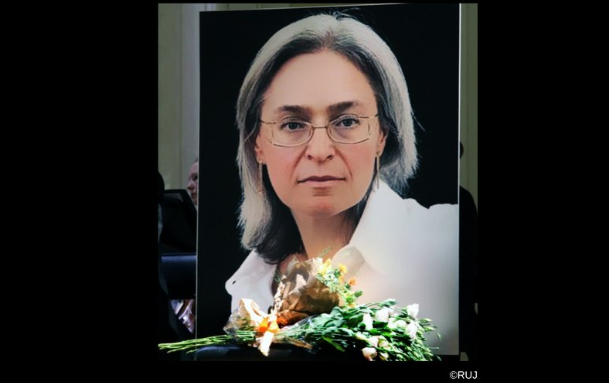 
The European Court of Human Rights released a judgement on 17 July, stating that the investigation of Russian journalist Anna Politkovskaya‘s murder “failed to look properly into who commissioned the crime”. The Court decided that the Russian government violated the Article 2 (right to life) of the European Convention on Human Rights and therefore, is due to pay 20,000 euros.

The case was brought to the court by the family of the journalist, who was murdered in 2006.

The press release of the European Court of Human Rights states:

The Court found in particular that while the authorities had found and convicted a group of men who had directly carried out the contract killing of Ms Politkovskaya, they had failed to take adequate investigatory steps to find the person or persons who had commissioned the murder.

The authorities had followed one theory about the instigator of the crime, pointing to a now deceased Russian businessman residing in London, however, they had not explained how they had followed through on that line of enquiry. They should also have explored other possibilities, including those suggested by the applicants. They had alleged the involvement of agents from Russia’s FSB domestic secret service or of the administration of the Chechen Republic.

The State had failed to abide by its obligations under the Convention to carry out an effective investigation and the length of the proceedings had been too long.

In 2006, investigative journalist Anna Politkovskaya was found shot dead in the lift of her apartment building in Moscow. She was a prominent critic of the president Vladimir Putin and was known for her reports in daily Novaya Gazeta on violations of human rights in Chechnya. Her death shocked the international community.

To support its reasoning, the European Court explicitly used the Council of Europe Recommendation on the protection of journalism and safety of journalists and other media actors, in which the Committee of Ministers recommended that “the conclusions of an investigation must be based on a thorough, objective and impartial analysis of all the relevant elements, including the establishment of whether there is a connection between the threats and violence against journalists and other media actors and the exercise of journalistic activities or contributing in similar ways to public debate.”

The European and International Federation of Journalists applaud the decision that sanctions impunity for crimes against journalists.

Park in the memory of Anna Politkovskaya

The memory of Anna Politkovskaya’s work and impact on journalism is still alive through her colleagues. Following numerous commemorations since her murder in the cities around the world, a park in Politkovskaya’s memory was opened in front of Novaya Gazeta’s headquarters in Moscow on 13 July. Readers and supporters of the newspaper gathered on the day to remember the journalist in decorating the park with flowers. It is the first commemoration of this kind in the Russian Federation, and now there is the
“Anna’s garden” (rus. Анин сад),  Novaya Gazeta reports.