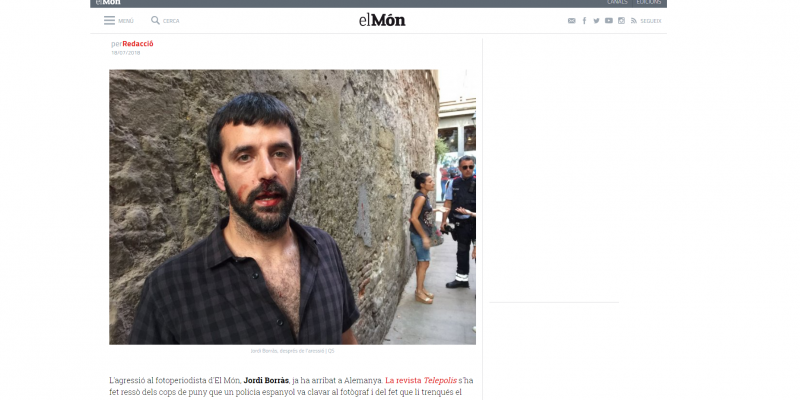 
The European and International Federation of Journalists (EFJ/IFJ) joined their Spanish affiliates in condemning the physical attack against photojournalist Jordi Borrás on 16 July after his coverage of a political event in Barcelona. Both Federations demand an immediate investigation on the attack and hold the aggressor accountable.

According to the Federación de Sindicatos de Periodistas (FeSP) statement, the photojournalist, working for the newspaper El Món, was walking through Barcelona’s city center after a political event, when a man recognised him and approached him shouting “viva Franco” and “viva España”. Then, the man assaulted the photojournalist and punched him in the face. Borrás had several contusions, a broken nose and had to be taken to a doctor.

The alleged aggressor showed a national police plaque before leaving the place. The police force has confirmed this information and has announced the opening of a disciplinary file to the police officer, who has been identified.

Jordi Borrás is a well-known photojournalist,  focusing on extreme right movements in Spain. He has been threatened by extremist groups before.

“This attack is a violation of the freedom of expression and the free exercise of journalism rights, which are fundamental pillars of democratic systems. We urge the Police Headquarters to open an urgent investigation and purge the corresponding responsibilities for this attack on a photojournalist”, affirmed Nemesio Rodríguez, president of the Federación de Asociaciones de Periodistas de España (FAPE).

“The Federación de Sindicatos de Periodistas (FeSP) asks to clarify what happened and to adopt appropriated disciplinary measures. Policemen must respect journalists’ work, don’t obstruct them and, much less, attack them”, said Agustín Yanel, General Secretary of the FeSP.

For its part, sources from the Association of Journalists FSC-CCOO strongly condemned the aggression and reiterated the need for Spanish journalists to work under safety conditions in a country that recognises the right to information as one of its constitutional principles.