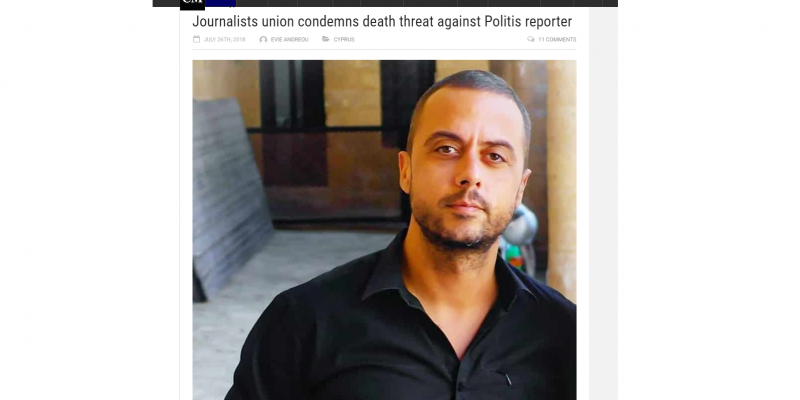 
Cypriot journalist Costas Constantinou has filed a complaint to Chief of Police after receiving death threats on social media. The European Federation of Journalists (EFJ) supports its affiliate the Union of Cyprus Journalists in condemning this act of intimidation against journalists and media freedom in Cyprus.

The threat to journalist’s life was posted in a comment section of a Facebook group “Dimokratiki Paremvasi” (eng. Democratic intervention) under shared post of Constantinou which he made on 20th of July, commemorating day of Turkish Invasion in Cyprus. The post was along the same lines as discussion on Politis radio show, where Constantinou shared critical views concerning the aftermath of Turkish invasion and who benefited from it. The comment asked for “someone should put a bullet through his head to be over with”, and calling the journalist “a Turk in every sense of the word”. The post was since removed from Facebook.

The case was reported to Chief of Police through Constantinou’s lawyer.

Costas Constantinou, working in the Politis media group, is known for his daily columns and radio discussions on political and social issues of Cyprus. The journalist admitted, that he has experienced anonymous threats and derogatory comments on social media in the past, but it was the first time that the threat was not anonymous and with a clear incitement.

The Cyprus Union of Journalist (ESK) has shared a statement, saying

“Part of the journalistic mission is also the presentation of views in columns and broadcasts. No journalist should be threatened, should be harassed, should be slandered and interceded for views he formulates by exercising his work.”

The IFJ and EFJ submitted an alert regarding this case to the Council of Europe Platform for the Protection of Journalism.