Journalists detained in Dresden after complaint by far-right protester 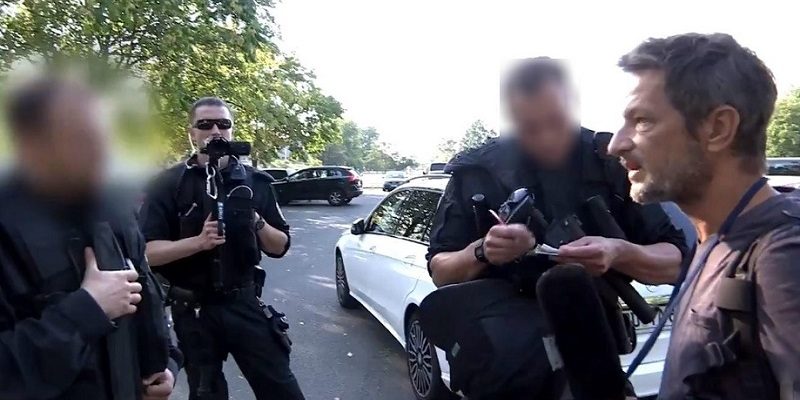 
Members of a TV crew working for German public broadcaster ZDF´s investigative political magazine programme Frontal21 were detained by police during 45 minutes, on 16 August, after a complaint by a participant at a Pegida (far-right) demonstration in Dresden. The European Federation of Journalists (EFJ) joins its German affiliates, DJV and dju in ver.di, in condemning the Saxon police action.

Footage shot by the camera team, which included broadcast journalists Ulrich Stoll and Arndt Ginzel, shows a procession of demonstrators including one man shouting “Lügenpresse!” (“lying press”) while looking and pointing at the camera team. The footage also shows the demonstrator near a police unit insisting the journalists accompany him to the police.

The Saxony state police confirmed on Twitter that “media representatives at the scene were accused of a crime by reason of which the police were obliged to carry out an identity check. On conclusion of this measure the journalists could resume their work”.

The Prime Minister of Saxony, Michael Kretschmer (centre-right CDU), wrote on Twitter that “The only people acting seriously in this video are police officers” which unleashed hundreds of comments accusing Kretschmer of discrediting the journalists.

“This is an unjustifiable interference in the freedom of the press,” reacted today DJV chairman Frank Überall, calling on Saxon Prime Minister Michael Kretschmer to justify his comment.

The EFJ joined dju in ver.di and DJV in calling on Saxon public authorities to respect journalists’ rights. “The watchdog role of journalists is of particular importance in context of protests and demonstrations. Any attempt to remove journalists from the scene of demonstrations must therefore be subject to strict scrutiny. We demand clear explanations from the Saxon government regarding the way some policemen are emboldening far-right followers in their aggressive behaviour towards journalists,” said EFJ General Secretary Ricardo Gutiérrez.